Editor’s Note: These whiskies were provided to us as review samples by Paul John. This in no way, per our editorial policies, influenced the final outcome of this review. It should also be noted that by clicking the buy links in this article our site receives a small referral payment which helps to support, but not influence, our editorial and other costs.

Most Indian Single Malts are distilled at multiple locations. Paul John Distillery does it all at their facility in Goa, India. A coastal town full of sea and spices. Each glass of Paul John lets you explore the many facets of Goa.

Non chill filtered whisky, as is the case with both Paul John Pedro Ximenez and Paul John Oloroso, means that there is no cooling and fine filtering to remove residual matter than can cause cloudiness. Paul John feels that this process can also remove some of the genuine flavor and aroma.

Select cask is also a trademark of many Paul John whiskies, specifically these two below. Select Cask means that there is a vat of multiple casks that are hand selected by the master distiller to go into that specific whisky. The term “Single Cask refers to the bottling of only one single cask, done at cask strength. It is sold in limited numbers and each bottle bears the cask’s and bottle number.” 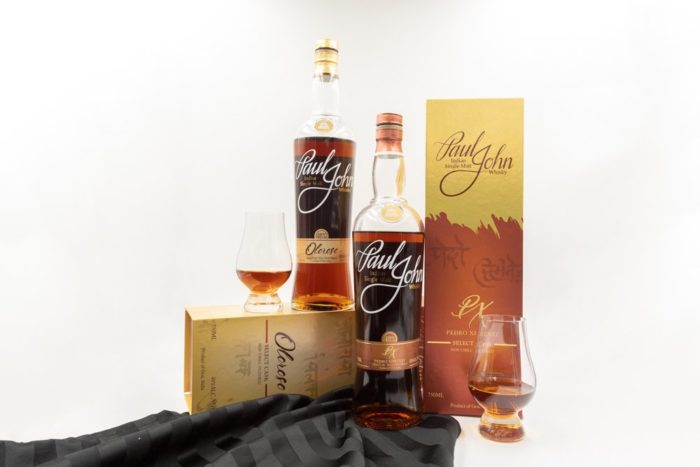 Nose: The aroma is very faint of marsala wine, prunes, and other overripe fruits like figs. I also get notes of raisins, and fermented stone fruit. It has a heavy and syrupy nose. Sweet and pleasant.

Palate: The palate has those typical, sweet bourbon flavors. No hint of smoke or peat that you might find in some of the other Paul John bottles like the Christmas 2020 edition. The Paul John Pedro Ximenez is hot with orange, molasses, and cinnamon notes. It’s malty with a heavy mouthfeel.

Nose: Overall a very malty, seawater and sweet sugar aroma. I found hints of brine, oak, dark rum, and brown sugar. It’s like a delicious salty rum cake from the Caribbean with a hazelnut, chocolate finish.

Palate: My first sip I thought the palate was slightly different from the nose with a bit of bread and butter pickle. This must be due to the brine and seawater aromas. I also get notes of dark chocolate, molasses, and orange with fennel and hazelnut after finish. This is a complex whisky with lots of subtleties to explore in the nose and palate.

Final Thoughts: Pedro Ximenez is very consistent from start to finish. There are no surprises which can be both good and bad depending on how you like your whisky. Overall this is a good, smooth sipping whisky. It has a heavy nose and mouthfeel with all the right warmth and spice. Tastes like a typical bourbon with notes of fruit, nuts, molasses, oak, and cinnamon.

Paul John Oloroso is a bit strange overall with the mix of sweet and sea spices. It’s strong, surprising and lingering. To me it tastes a bit like Indian food, this must be due to the same spices being used that one might find in a typical Indian dish. If you’re a fan of sweet and salty this would be the whisky for you. I’m really curious if this pairs well with Indian food.