Editor’s Note: This whiskey was provided to us as a review sample by M&H. This in no way, per our editorial policies, influenced the final outcome of this review. It should also be noted that by clicking the buy link towards the bottom of this review our site receives a small referral payment which helps to support, but not influence, our editorial and other costs.

M&H – AKA Milk and Honey – is a little distillery in Tel Aviv. All of their spirits (currently single malt whiskies and single malt gins) are kosher. What does it take for a spirit to have that distinction?

First, let’s start with what it means to “keep kosher.” That’s following the laws of kashrut (also transliterated as kashrus or kashruth), which govern what foods are acceptable and how those foods must be prepared in Jewish tradition. These laws stem from writings in the Old Testament: Exodus, Leviticus and Deuteronomy, specifically, and tradition holds they were given to the Jewish people to keep them distinct as the children of God.

Many basic ingredients are inherently kosher, like salt, sugar and water. Most things that grow from the ground are kosher, too, so our whisky-making grains are covered. Animal-based products and components that are processed are where things start getting tricky. Every ingredient in a kosher whiskey must be kosher, so that means any yeast and enzymes, too.

Beyond ingredients, the production equipment must be kosher and no non-kosher products may be produced on the same line. When all these requirements are met, a hechsure (symbol) will be awarded by a kosher-certifying organization signifying the product’s suitability.

One more hurdle must be cleared to keep spirits kosher: Passover. It’s against kashrut for observant Jews to own anything made of leavened grains during Passover. Since the making of whiskies involves yeast and the aging of whiskies would include many Passovers, ownership over that eight-day period is a problem. The solution is to transfer ownership annually to a non-Jewish party.

According to journalist Devorah Lev-Tov, most spirits are kosher, providing they don’t involve grapes. This poses a challenge for the traditional finishing practices of single malts. As reported here previously, M&H went through the effort of having kosher sherry made to give them kosher sherry casks to age whiskey in.

M&H also experiment with single casks of different finishes, and today we’re experiencing an ex-Islay and an ex-rum finish. These casks were hand-picked by the distillery and their distributor, ImpEx Beverages. 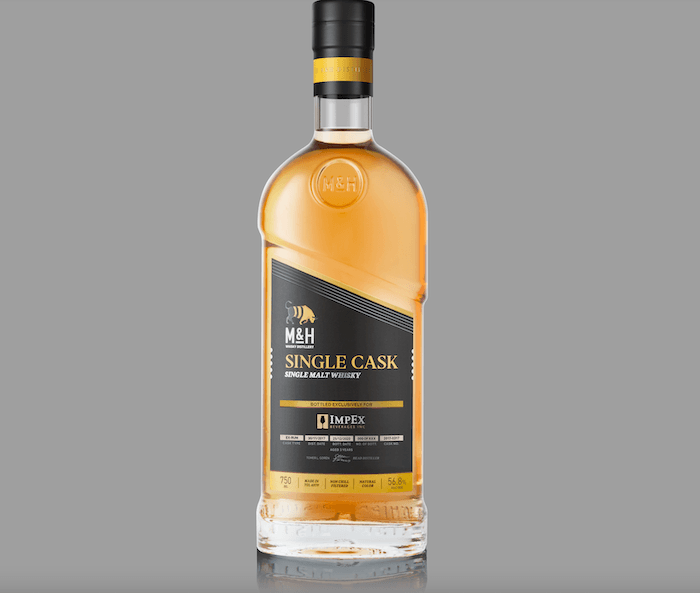 Vital Stats: The Ex-Rum finish is 113.6 proof, made from 100% malted barley and aged three years. Find a bottle in select locations for around $80.

Appearance: This liquid is a very clear, pale amber, like oaked chardonnay.

Palate: On the whole, this spirit is abrasive; a touch of water brings lots of fruit to the front palate and malt to the mid. There’s a slight persistent bitterness on the long finish. 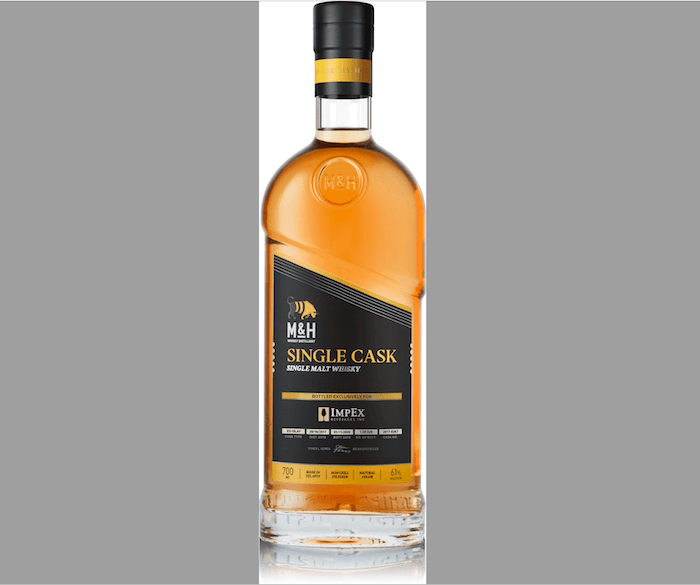 Vital Stats: The Ex-Islay finish said 115.6 proof on my sample, though other materials stated 122 proof. Either way, it’s made from 100% malted barley and aged three years. Find a bottle in select locations for around $85.

Appearance: This whisky is a pale gold that quickly forms fat tears.

Nose: On the nose it’s smoked meat and white flowers at the seaside. Less aggressive than the rum cask, which is a slightly lower proof.

Palate: Salty and rough on the attack, with stone fruit and cereal sweetness on the mid palate. A similar lengthy bitterness on the finish; more like iodine, medicinal.

Final Thoughts: I didn’t care for either of these finishes. Similar to my last experience with M&H, I wanted to like these whiskies because of the care that goes into making them. They just need a little more judicious sculpting of the flavor profile, or perhaps a little more time in the cask to smooth out those rough edges.