The concept of “finishing” whisky in first-fill sherry casks is nothing unusual these days. However, four different types of sherry cask being used to finish an identical whisky from the same run is unusual. And that’s exactly what Tomatin has done with its Cuatro Series.

On January 15th, 2002, the distillery produced a rather ambitious run of whisky, which was aged for nine years in traditional ex-bourbon casks. After slumbering for nearly a decade, it was poured on June 2011 into four separate types of first-fill sherry casks, where this whisky was henceforth aged for an additional three years.

Enter: “Cuatro,” a Spanish name that tips its hat to the Spanish sherry casks used to create four different finishes.

As any sherry aficionado knows, Manzanilla and Fino sherries are aged “biologically,” whereas the Oloroso and Pedro Ximenez sherries are aged “oxydatively.” The difference in cask wood left behind, after each type of sherry has been poured out, is fairly dramatic. The casks hold promise in regard to creating four uniquely finished 12-year-old whiskies. Let’s move on to the tasting notes for the Tomatin Cuatro Series, and explore the fruit of Tomatin’s labor. 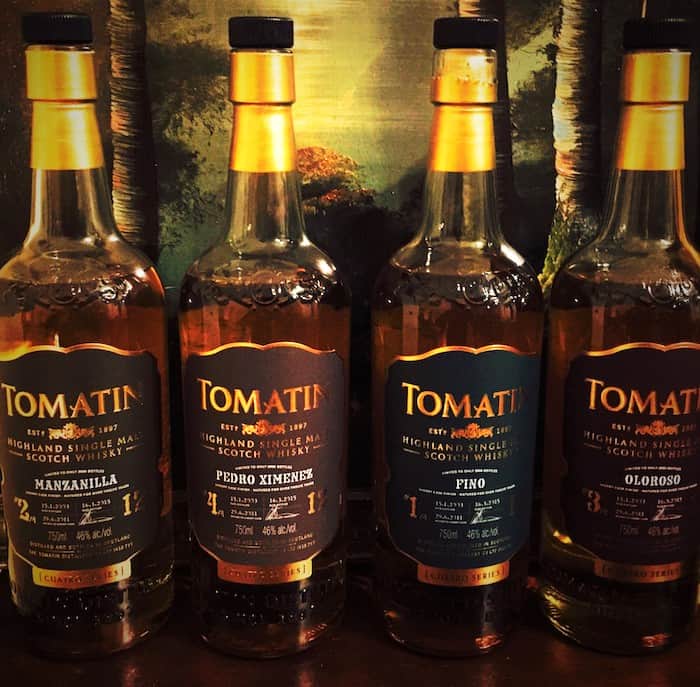 Finish: Short to medium with a creaminess that hangs on, in addition to hints of lemon and spicy oak. I burped and a big rush of lemon hit my palate. Is that too low-brow to admit?

Appearance: Pale gold that is slightly more radiant than the Fino; more beads in the glass, with some nice classic legs for a twelve year-old.

Nose: Gingerbread with some creamery butter drifts up out of the glass. The whisky’s profile seems a bit young. In fact, it kinda reminds me of the Kilkerran WIP six year-old bourbon cask. That is to say, it’s malty, almost to the point of conjuring up a bowl of Scottish oatmeal, along with a touch of brown sugar, and a smattering of golden raisins and apricots. In time, an “old scool” nose surfaces, with damp wool, and some paraffin-like Springbank characteristics.

Mouth: Considerably smoother than the Fino, more buttery and flaky (like a croissant), and with a creamier mouth feel. The fruit presence is less up-front, but more subtly elegant. Ginger Gold apples also come to mind, in addition to white muscat grapes. Unfortunately, the delightful flavors eventually turn a bit sour (not in a good way). I don’t think this shift is due to the influence of oak tannins, but it could be the Manzanilla “back-talking.”

Finish: Medium short, with a white peppery final note that fades to the death.

Appearance: Old gold, the darkest yet; thin, runny legs in the glass.

Mouth: At first, I was thinking this one reminds me of the Fino (on the nose) but now it’s offering buttery characteristics more akin to the Manzanilla. Lip-smacking fruit cake is served. There’s a little alcohol burn, but this fades in a few minutes. Yes, now I’m liking it better. Yogurt-covered almonds and white chocolate dance on the tongue, along with a bit of milk chocolate. The longer this whisky sits in my glass, the less it seems impatiently young.

Finish: Medium in length. There’s an interesting interplay of gunpowder and marzipan. At the death, a subtle nuttiness remains.

Mouth: The most creamy mouth feel of all four whiskies. Not a typical PX delivery, this one generates a slightly cloying combination of sweet and bitter, which cancel each other out. And now, there comes a strange procession of mothballs, lemon curd, damp wool, and Earl Grey tea. I’m also getting a bit of Christmas cake, and butterscotch, that mingle with the cloves of Earl Grey.

Finish: Medium in length. At first, I thought I was really going to like this one, but it fell from grace. The finish evokes a box of musty old Life magazines under the stairs in your basement, wet wool, a daub of sherry, bitter oak, and a kind of anti-climax at the death that’s hard to pin down. The aftertaste of Ivory soap emerges, albeit faintly. Go figure.

Like I say, at the death, this whisky gets up on its soap box…and then has nothing to say. I’m thinking that perhaps the PX casks were not of the highest caliber.

As you can see, the Cuatro Series was something of a disappointment, especially given the price point, which in Oregon currently hovers at $80 per bottle. This added up to $320 for the entire series of four bottles. It would have been nice to see a discount for customers who bought the whole shebang. A bit of Internet research uncovered that fact that bottles held steady at around $50 a piece in the UK, until most of them sold out.

If you can find a bottle of the Manzanilla for sixty dollars (or lower) in the USA, then I think the price-to-performance ratio would be far more desirable than what they are selling for here in Oregon. Despite this fact, I never rate whiskies based upon their prices, so my ratings (above in the Tasting Notes section) stand on their own, based solely upon the scent, taste, finish, mouth feel, and overall impression of each bottle.

I must confess that I will probably give the PX away to a friend who drinks his whisky on ice, and doesn’t pay much attention to whatever ends up in his tumbler. Ironically, after this rather involved tasting session, I need a drink.

Speaking of which . . . I recently purchased a bottle of the Tomatin 30 Year Old, and I can tell you, it exceeds my expectations by a Scots mile. Around eighty percent of the distillery’s five million liters of whisky per year goes into blends, so it was nice to lay hands on some of the good ole stuff that was held back.

The time has come to fetch my Tomatin 30 Year-old out of the liquor cabinet! Forget the 1970’s Shaefer beer commercial. A three decades old Tomatin is “The one to have when you’re having . . . only one.”

One more, that is. Ha! Sometimes it takes a $225 bottle to restore one’s faith in a rather curious distillery like Tomatin, which mainly produces whisky for blends. I enjoy the highly complex fruity, buttery taste and scent of the 30 Year-Old, which are borne out by a nice rich, oily mouth feel.

Now, if you’ll excuse me, I have an ounce of prevention to pour. When a single malt is perfect in its own right, then it’s right as rain.

1
Shares
852
Views
Share on FacebookShare on TwitterGet Our Newsletter
Cheers to the Dads! Personalize a bottle of his favorite whiskey to create a modern gift for the modern man. Use code: FATHERSDAY20 for $20 off your next order of $100 or more at ReserveBar