Douglas Laing & Co, the independent bottler of Timorous Beastie 40 Year Old, has been around for seventy years. Some of its popular bottlings of late include Big Peat, Rock Oyster, the Old Particular series, and the Provenance series. The company is based in Glasgow, Scotland.

Timorous Beastie 40-Year-Old is a marriage of single malts from The Highlands. Some of the whiskies that made it into this malt blend include Dalmore, Glengoyne, and Glen Garioch. 1,080 bottles were produced.

The title of the whisky was taken from a Robert Burns poem called “To A Mouse.” This ode is fairly difficult for modern eyes to decipher. Here’s the line from which the title is taken: “Wee, sleekit, cowrin, tim’rous beastie, O, what a pannic’s in thy breastie!” This roughly translates into the lines: “Little, sleek, cowering, timid beast / Oh, what a panic is in your chest!”

Burns’ poem has been quoted up through the years in pop culture–most notably by John Steinbeck in his novel, Of Mice And Men, Douglas Adams in his book, A Hitchhiker’s Guide to the Galaxy (in which earth’s creators were mice), and a sketch by Monty Python’s Flying Circus (Word Association).

Well, okay. Fair enough. So much for my impressions about the marketing of mice. Malt Wisney be damned. When all is said and done, it’s the actual Scotch that keeps me coming back for more. Suffice it to say that I’m a big fan of whiskies without chill-filtration, and which have been bottled at cask strength.

To call Timorous Beastie 40 Year Old “smooth” is both a cliche, as well as an understatement. Yes, it requires dedication and patience to fully appreciate. No, it’s not suited for sipping quickly with an eye on one’s pocket watch (or cell phone). Regardless of the occasion, however, drinking this dram at its native cask strength is not so very hard.

Such a feat might come as a surprise to the timid of heart, especially considering the fact that the malt blend was bottled in 2016 at a whopping 109.4 proof. Hence the relevance of this whisky’s cryptic, though colorful, title. At any rate, let’s move on to the business of sniffing and tasting, to see what sort of impressions jump out of the glass. 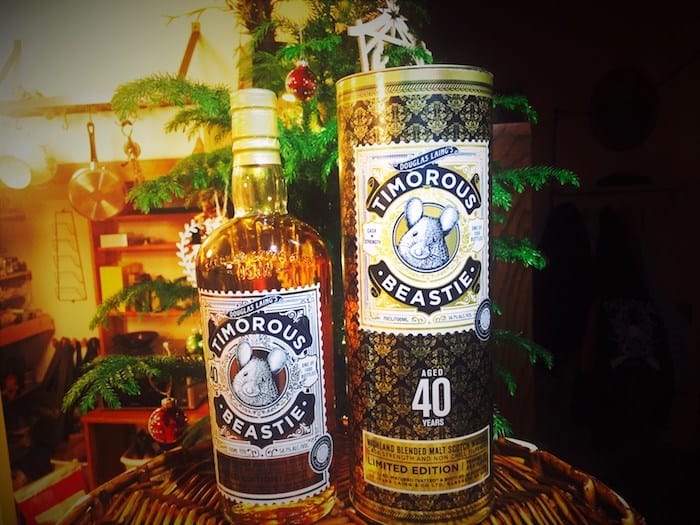 Appearance: Fair legs grip the sides of your glass as passionately as Madonna straddling a dancer on stage. Well-defined beading corroborates this whisky’s forty year old age statement. I just love the pale gold color, which seems darker in the bottle.

Nose: Baked cinnamon roll; caramel corn; tropical fruits like mango and papaya; figgy pudding; beeswax; clover honey; allspice; and finally, a whisper of oak. The wood presence seems to hover, out of time, occasionally interrupting the orderly procession of other notes, which come and go like clockwork in every sip (more or less).

Palate: Wow, this opens more bombastically than I’d expected from the delicate and complex nose. Enter: junk food junkie. I’m getting notes of Bit o’ Honey, Twix Bar, and Butterfinger. Meanwhile, the tip of my tongue feels tricked by lemon zest and dried orange peel. But wait, there’s more . . . . Lemon Pledge announces its presence, moving the palate in a more industrial direction. In the past, I’ve encountered this rare tasting note before in old Highland and Campbeltown malts. What a nice surprise!

Malty notes are also big players in this blend. They brighten up one’s dram considerably, giving the impression of warm, baked goods. Mmm, a chance to taste the cinnamon roll that was present in the nose. Decadent! I really like the way the malts come together to form a cohesive overall impression, rather than struggling against each other like disgruntled Highland chieftains.

Lastly, comes a bitter, woody note . . . which is actually quite a welcome change. Why? Because bitterness mitigates so many top-heavy, sweet notes, which initially coated the tongue. Along with the oak, dried pressed flowers add a delicate, floral note. Very nice. Wait for the finish . . . here it comes: long as long can be, and finally expiring with a brush of Lemon Pledge on antique wood furniture.

As a caveat, it’s worth mentioning how the addition of water tends to ameliorate some of the overpoweringly dominant sugary notes, thus adding more depth to the whisky. By “depth,” we’re talking about more of an interplay between malt and oak, which never exceeds a (pleasingly) timorous role in the blend.

Of course, such a statement is not meant to seem ungrateful for Douglas Laing’s generously high ABV. As any seasoned whisky drinker will tell you: It’s nice to be able to adjust the strength of your dram. Just remember that you can always add water, little by little, but you can’t take back what you’ve added.

I always relish the chance to taste a 40 year old whisky, even when it's a "mere" blended malt. Highland distilleries can certainly scare up some fantastic end-results. Timorous Beastie is a charming example of the way such whiskies can be married to advantage. Particularly of interest, in such an old dram, is the fact that oak tannin does not dominate.

The Highland blended malt Scotch whisky in my glass is anything but timid. Rather, it's regal, stately, and distinguished. But what of another indefinable "something" that resists categorization? Think Mickey Mouse as a sorcerer's apprentice in Fantasia. That's closer to the mark than a wee beastie peeking out from Douglas Laing's kitschy label.

Like a mouse in a big house, this bottle is hard to find in 2018. Seeking and finding could be worth the effort--that is, if you don't mind pawning your magic wand. Expect to pay handsomely for the opportunity to experience such a beguiling creature comfort.