Editor’s Note: This whiskey was provided to us as a review sample by The Glenlivet Distillery. This in no way, per our editorial policies, influenced the final outcome of this review. It should also be noted that by clicking the buy link towards the bottom of this review our site receives a small referral payment which helps to support, but not influence, our editorial and other costs.

The Glenlivet distillery opened in 1824. Eventually, management jumped on board and became “legal” under the dictates of George IV. I find it a bit off-putting that The Glenlivet seems proud of its 19th century submission to the crown, especially considering how much money it makes these days in sales to the United States–a country that said “no” to unfair taxation without representation, long before The Glenlivet said “yes.” In fact, tax rates stayed quite low in the U.S. until the early 20th Century.

As for King George IV, he was a pot-bellied monarch who wore a cape that looked like a Swedish rug, along with tight pink panty hose and matching pink rosebud shoes. It’s hard to believe such a dandy struck terror into the hearts of Scottish bootleggers, but I guess he must have. Then again, he wasn’t the one making arrests. There was hardly enough time for that between third tea and fourth meal. Last time I saw a picture of George IV, I was reminded of the baron in Chitty Chitty Bang Bang.

At any rate, American oak casks and European oak casks are used to create The Glenlivet’s 12 year old official bottling. What else bears mention? Well, it’s boring, for starters. It’s entry-level, and it’s the most widely available Scotch in restaurants and bars in the United States.

This is not to say The Glenlivet doesn’t also make astonishingly good whiskies, because it sure as hell does. But many of those bottlings, at least by my reckoning, are single cask releases, and they are often sold by independent bottlers like Signatory.

Last year, I bought one such magnificent bottle, and milked it like a baby…until, alas alack, the glorious broth ran dry. Oh, was it good. So very good. And thinking about it makes me dread writing up the tasting notes for this middling dram. Duty calls, however.

I shall now sip and spit from my bottle of 12 year old, watered down, artificially colored Glenlivet that has turned many a potential single malt lover into fans of American bourbon instead. 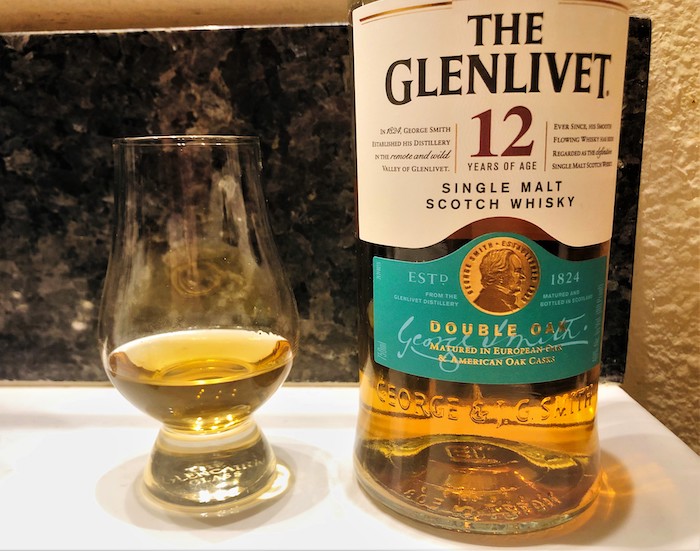 Mouth: More of the same with cardboard, wet pie crust, the flavor of an old-fashioned copper penny, vague fruity notes, as well as malted milk balls.

Finish: Short with a diffuse malty note, and salted cashew.

As I've said in my other Glenlivet reviews lately, you can turn a sow's ear in to a silk purse by using The Glenlivet 12 in cocktails, especially those with two thirds inexpensive Speyside whisky, and one third Islay peated whisky (Ardbeg Ten works wonderfully). Drinking entry-level Scotch like this is also fine with ice. There are far worse fates on earth.

Those with DIY tendencies might consider pouring a full bottle of Glenlivet 12 into a decanter, along with one tenth's worth of a higher end, cask strength Speyside, such as Aberlour A'Bunadh. This can stretch out the more expensive A'Bunadh, even while shoring up one's wallet against looming economic clouds on the horizon. These days, such tricks are not cheap; they are smart.

"Decanting up" is also great for company when guests visiting don't really know the difference between a fairly good Scotch pleaser and the real deal. And, of course, such drinkers often prefer their pours on the rocks.

As you probably already know, ice covers up the highs and lows of most good Scotch. I call it "the great equalizer." A few tinkling cubes are more than capable of transforming even the best single malt into mid-level mediocrity.