Speyburn is based, not surprisingly, in the Speyside region of Scotland, even though older Speyburn 10-Year-Old bottles in the past were labeled as “Single Highland Malt Scotch Whisky.” Speyburn Distillery was founded in 1897 by John Hopkins & Company and built near the Granty Burn, a stream hidden in a valley, using in part river stones from the bed of the River Spey. The distillery today is noted most visually for its Pagoda style roof poking through the tree tops where it is located.

The core range of Speyburn at present is the 10-Year-Old, the 15-Year-Old, and Bradan Orach No Age Statement whiskies. Today, I will be reviewing the 15-Year-Old, which has been aged in combination of American oak and Spanish oak casks. The whiskies typical of the distillery’s offerings are aged in what’s described as traditional dunnage warehouses after having been distilled on so-called “classic Speyside” still equipment. 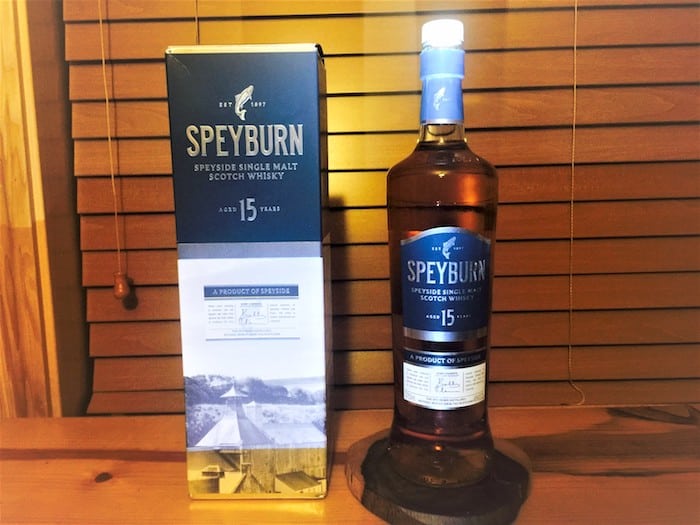 Appearance: Old gold in color with unrefined legs and beading.

Speyburn 15 Year Old whisky isn't the sort of dram to save for special occasions. Frankly, as for the difference between 12-15 years with regards to Scotch whisky bottlings, the Speyburn doesn't taste particularly refined to me, especially when compared with a Springbank 15 Year Old, or a Highland Park 15 Year Old. I would rather drink an Old Pulteney 12 Year Old instead of a Speyburn 15 Year Old any day of the week, which is somewhat ironic because the same corporation owns both distilleries.

Despite these rather sobering cost-to-value comparisons, I'm happy to share a real life story that, more of less, "sings the praises" of Speyburn, at least when cost is not a factor. A few weeks ago, I brought a bottle of Speyburn 15 Year Old to a party with friends that regularly drink blended Scotch whisky, and it was a big hit. Nearly half the bottle was consumed in a few hours' time. Most people drank it neat in one hand, along with a beer in the other.

Upon leaving the party, I was offered compliments and thanks for bringing the Speyburn. One guy said, "That sure beats Famous Grouse!" Yes, I took the half-consumed bottle back home with me . . . to save for another occasion with the same faces (and palates).