To begin, I have to give some credit and sympathy for any distillery trying to carve out its own niche in the Speyside region.

What we’ve previously called “the heart of single malt whisky distilling in Scotland,” the Spey River valley packs in over half of Scotland’s malt distilleries, including giants like Glenlivet and Glenfiddich as well as Speyburn. While Speyburn wouldn’t likely be considered an underdog in that packed market, that doesn’t negate the challenge of establishing its 10-year-old “Highland” as “a classic Speyside single malt.”

Distilling its first batch of whisky on Dec. 15, 1897, founder John Hopkins worked his staff feverishly for the next two weeks to get the first cask filled by Dec 31, hell-bent on having at least something stamped with the year of Queen Victoria’s Diamond Jubilee. For my fellow Americans, a Diamond Jubilee marks a British monarch’s 60th anniversary of ascending to the throne.

In a lush region with particularly pure water, Speyburn was built along the Granty Burn, a tributary of the River Spey that the distillery claims has “exceptionally pure waters.”

The 10-year-old is on the more affordable side of Speyburn’s range, aged in American oak casks that formerly held bourbon and sherry (not sure of the order), and aiming to embody the “delicate, fruity character” that typifies Speyside Scotch. 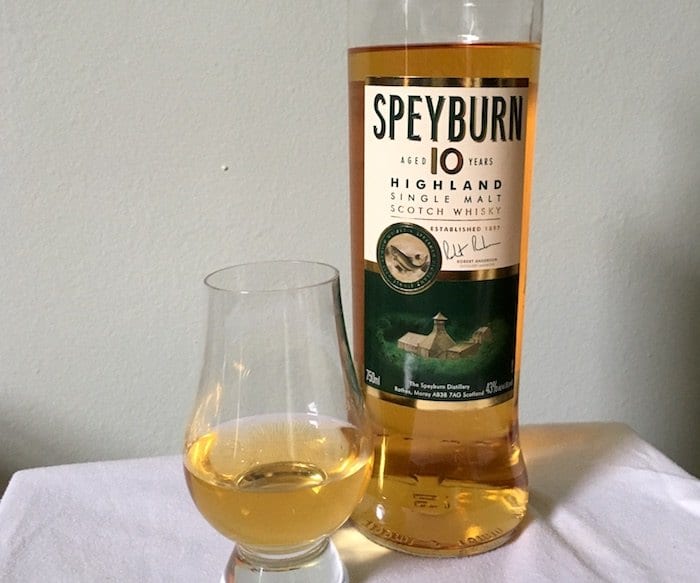 Vital stats: Single malt Speyside whisky aged 10 years in ex-bourbon and ex-sherry American oak casks. Bottled at 43 percent alcohol by volume in 750-milliliter bottles. Speyburn’s suggested price is $29 and that seems to be close to what I’ve seen online.

Nose: When first putting my nose to the glass, I was hit with a rush of what seemed like spring in whisky form: bright, acidic, and tart, dominated by lemon and oak with an undercurrent of floral notes. After a few seconds that acidity mellowed a bit, giving way to an earthier honey aroma with touches of lavender, cardamom, and coffee.

Palate: A sip lands on the tongue with the consistency of a simple syrup and the flavor of a basic honey. Initially that honey flavor takes on subtle notes of hay and oats with a creamy undercurrent. After a few seconds, spices gradually begin to tingle through the mouth in the manner of cinnamon and allspice. That builds slightly for a bit, but swallowing takes it only to the point of a dull roar along the sides of the mouth. That quickly fades back into the honey flavor with just a murmur of peat that lingers in the mouth for the next few minutes.

To be blunt, Speyburn’s 10-year-old single malt walks a very fine line between subtlety and just plain lack of flavor. On paper, it has everything you could want in a classic Speyside whisky with sweet, fruity notes and bit of spice. I found nothing objectionable with the several drams I poured myself, but I also didn’t find much that was memorable either. For its price and accessibility, it might be a good introduction to a Speyside scotch to a novice. For more discerning palates, I’d recommend using this one as a mixer.