Canadian whisky has a bit of an enigma to it. It’s a Canadian product, but an American staple. It’s a well-known and fairly expansive market, but it wasn’t the origin of spirit distillation in the nation. And it’s allowed to have a considerable amount of non-whisky in bottles marked “whisky.”

Pendleton is one of these Canadian whiskies, even if it seems a bit American. It’s distilled and aged in Canada, but bottled in Oregon by Hood River Distillers and owned by by the parent of Jose Cuervo. It’s also brought to proof with Mt. Hood water. The heritage of the brand is furthermore connected to the Pendleton Round-Up, a world class rodeo. This is fitting, considering the strong link America has to Canadian whisky.

American taste is what cemented the market for the spirit. Our civil war negatively impacted American distillation, but not drinking enthusiasm (wars create huge spirit demand, historically speaking). America had only to look over the border to find whisky, and Canadian whisky quickly became the best-selling whisky in America. It became so popular, in fact, that it remained the bestseller until 2010, where bourbon just barely overtook it. Since then bourbon has only narrowly kept the first-place edge.

Today’s spirit is very different. Whisky in Canada must legally “possess the aroma, taste and character generally attributed to Canadian whisky.” The legal aging requirement stands, with the distinction that it is now three years instead of two. A more unusual law is the 9.09% law, which allows for that percentage of the bottle to be a product other than Canadian whisky.

This law is infamous; it’s both mocked and misunderstood by many an arrogant bartender or whisky aficionado. First off, the belief that the 9.09% can be just anything is incorrect. The 9.09% addition must be caramel coloring or flavouring (which is not unique to Canada; Scotch whisky makers make great and widespread use of the additive), or a spirit or wine aged at least two years.

And so is the uniqueness of Canadian whisky. It may not be the most refined or well-regarded, but it certainly is popular and has had its trailblazing moments. The whisky may not all be whisky, but it will certainly taste like it. So does this bottle of Pendleton 20 Year, even if it has a touch of America. Part of this touch comes in that “the bottle is wrapped in a leather sleeve with tooling crafted by third-generation saddle maker Randy Severe, whose family has made custom saddles for nearly 70 years.” 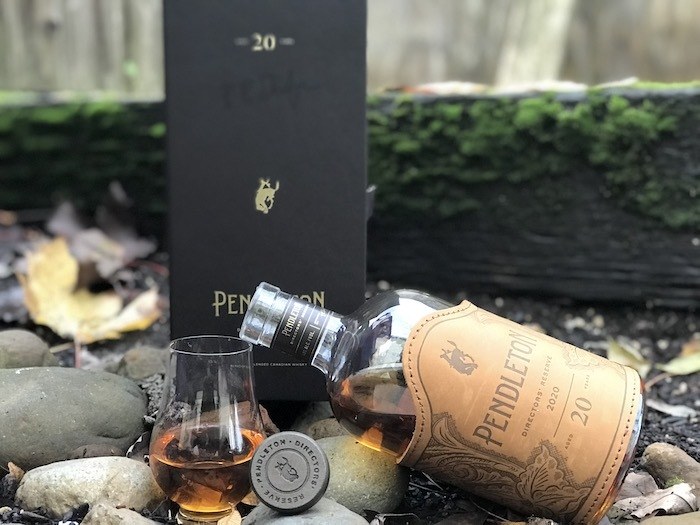 Nose: Light brown sugar all the way through, with a touch of waxiness at the end

Palate: The palate starts with oakiness and buttered toast, moving into almond notes, before ending with molasses.

This expression is definitely more complex that other Pendleton expressions, for the merits of its age. There’s a flow of flavor that’s not always found in Canadian whisky, and also more depth. It still does not stack up to the range of 20 year whiskies, and doesn’t seem likely to break that barrier.