When I first started learning about whisky, one of the first topics introduced to me was classification. In a group of other new-to-whisky folks, the different distinctions of malt, grain, blended, and single, and then bottlers, confused us the most.

Grain whiskey distilleries can produce their own labels and expressions, but more often they make grain whisky to supply other distilleries. Port Dundas was one such distillery; in the late 19th century it actually had the largest output of any Scotch distillery. Port Dundas’ long life ranged from 1811 to 2010, when Diageo closed it not for disrepair or lesser need of grain whisky, but simply to consolidate all grain distillation to Cameronbridge.

This isn’t goodbye, however, since stores of whisky were at the distillery at the time of close. These stores stand to be mixed into future limited release blends, and Diageo released Port Dundas single grain whiskies in 2015. These expressions came out with a newer interest in single grain whiskies, which previously have been disregarded as low-quality blending swill.

Single grain whisky has as much to offer in terms of craft and production as the lauded single malt. The problem is that until now whisky distilleries really haven’t explored these options, with the exception of a few bottles here and there. Thus there was no reason to develop any interest in the single grain on the part of whisky drinkers.

This cycle of no supply for no demand may be seeing its end as distillers try to get a jump on the single grain market. William Grant & Sons released 25 and 30 year-old Girvan expressions in 2013 to appeal to high-end whisky drinkers. The next year Diageo appealed to the masses by putting a significant marketing campaign behind Haig Club (earlier this year they actually released two canned cocktails made with Haig Club, though not available in the U.S.).

Muckety-Muck is a Port Dundas single grain whisky, though it has a different name and label. And that’s where the bottlers come in. Orphan Barrel is a bottler that acquires lost, forgotten, or unwanted “orphan” barrels of high-end aging whiskey. These are then bottled in limited runs. It’s easier to accomplish this feat when you’re owned by Diageo, the largest spirit conglomerate on the planet.

This expression pays an interesting homage to a lesser known element of Port Dundas’ operation – its piggery. It’s actually fairly standard for distilleries to be homes for livestock, since distilling draff makes excellent feed. Around 400 pigs lived at Port Dundas, some of which were exceptional in size and so awarded their own prize cards. One of these pigs was Muckety-Muck, a special specimen whose medals and awards decorated his stall for all to see.

Whether it comes to Muckety-Muck himself or this rare, old whisky, I’m sure we can all say the same thing; that’s some pig. 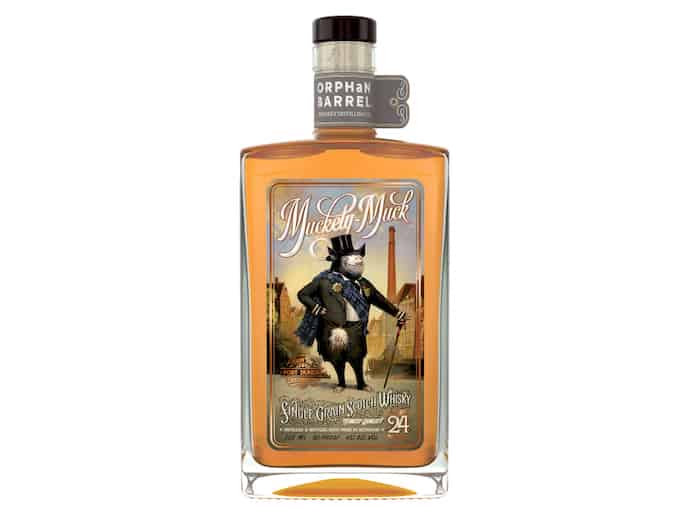 Nose: Fruity for just a moment, sweetens into musk.

Palate: Very creamy texture. A light fruit taste up front, reminiscent of pears. Fairly boozy. A bit tannic and bitter moves into the very butterscotch finish. With continued drinking it becomes a bit monotone and bitter.

I have had the opportunity to taste Port Dundas’ single grain expressions previously, as well as other Orphan Barrel expressions, and I’m extremely disappointed to say that this bottle measures up to neither. After a few sips the bitterness was a bit much. Water softened it a bit, and drinking this on ice helped a lot, but it unfortunately took a lot of the flavor out too.

I quite enjoyed the Port Dundas expressions I’ve had before, and feel that the problem with Muckety-Muck is that it just couldn’t stand up to the longer aging.

3
User Rating ( votes)
Sending
32
Shares
6.5k
Views
Share on FacebookShare on TwitterGet Our Newsletter
Cheers to the Dads! Personalize a bottle of his favorite whiskey to create a modern gift for the modern man. Use code: FATHERSDAY20 for $20 off your next order of $100 or more at ReserveBar