Nikka Distillery is one of Japan’s flagship whisky producers, and was one of the first to produce whisky in the country. Their history is long and storied, and definitely worth a glance. The company started as a small whisky producer on the northernmost island of Japan, far away from most major cities, in 1934. Despite many hurdles introducing a foreign spirit into the country, they are still producing whiskey almost 100 years later.

Japan didn’t have any whisky production whatsoever until the early 20th century. The founder of Nikka Distillery, Masataka Taketsuru married his Scottish wife, who he met when he moved into her house in 1918. He studied in Glasgow, learning how to make whisky and later brought his talents back to Japan. Taketsuru helped build Japan’s very first whiskey operation, Suntory, and he opened his distillery in Yoichi, Japan in 1934.

An article from BBC explains how important his wife Jesse (Rita) Cowan was in his success. She provided financial and emotional support while adapting Japanese culture, language and traditions, with the added difficulty of living as a British woman in Japan during World War II. Apparently, her own adopted daughter held resentment because of her Scottish heritage, and even more outrageously, she was accused of being a spy because of an antenna they had on the roof of their home. There’s even a Japanese TV show about them called Massan. Released in 2014, it tells the story of Taketsuru and Rita and their struggles opening Nikka during such a tumultuous time in history. 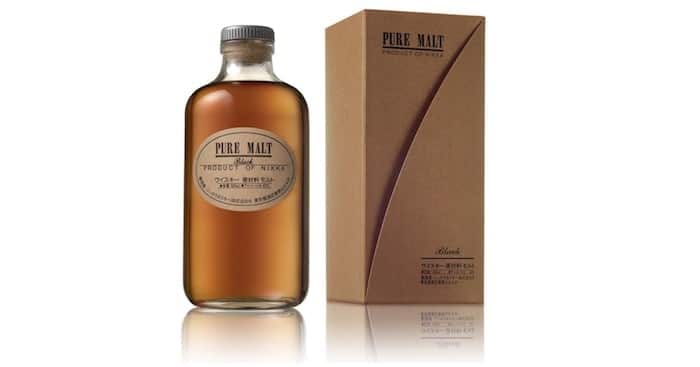 Vital Stats: The AVB is 43% and there is no age statement for the whisky. The mash bill is 100% barley, peat-dried, from a couple different distilleries. Nikka’s Pure Malt Black is part of their Pure Series, which offers Red, White and Black variations. This release is not available in the United States.

Appearance: The spirit is really thin, with no legs to speak of. The consistency looks similar to iced tea, and the color is very light and golden.

Nose: There are notes of peat, bitter dark chocolate, and tobacco. The smell isn’t very sweet, but there are notes of raisins that make there way through the dark notes of oak and smokiness. The heavy smell is a stark contrast to its light appearance.

Palate: There’s a lot of smoke present throughout, and on first taste it overpowers most of the other flavors. It’s definitely more savory than sweet, with notes of pine, orange peel, black cherries, and more dark chocolate. I wish the mouthfeel was thicker; it’s a little thin and watery for my liking. The finish is long and warm, with the peat smoke leaving my mouth feeling a little dry.

Nikka Pure Malt Black reminded me a lot of Scotch. Because it was so smokey, I wouldn't say it's very accessible for someone who isn't already a fan of smokey whiskies. I definitely see the appeal if a person prefers less sweet spirits. I did feel confused, because it looks so light and the mouthfeel is so thin, but there's a definite punch of flavor and smell that I wasn't expecting.