Editor’s Note: This whisky was provided to us as a review sample by Beam Suntory. This in no way, per our editorial policies, influenced the final outcome of this review.

Cult-favorite Islay distillery Laphroaig is basically synonymous with peat. This 200-year-old distillery is known for a polarizing style that balances a light body and gentle fruit with aggressive briny smoke. Drinkers are humorously divided between love, hate, or both.

For those of us who enjoy a good peaty wallop, the flagship Laphroaig 10-Year-Old is a textbook example of just how delightful not-that-old Scotch whisky can be. It pours the color of pinot gris, smells and tastes like a smoldering beach fire, and lingers with you long after the empty glass has been run through the dishwasher, dried, and put away for next time.

The opportunity to taste some very old Laphroaig doesn’t come along all that often, so I was excited to hear that late last year Laphroaig would be releasing a limited edition 28-year-old version of its official single malt in the United States. I was even more excited to see a review sample of it appear (thanks Beam-Suntory!).

This particular release was drawn from a range of 27-year-old casks that were vatted together and finished in sherry casks for another year before bottling. The Spirits Business reports the initial blend included casks of various sizes, including some quarter casks (the mind reels at a 27-year-old quarter cask, but hey, maybe in Scotland they don’t evaporate entirely within a few years). Suggested retail pricing is about $800 per 750ml bottle.

Is this venerable Laphroaig worth the indulgence for committed peat zealots? Let’s find out. 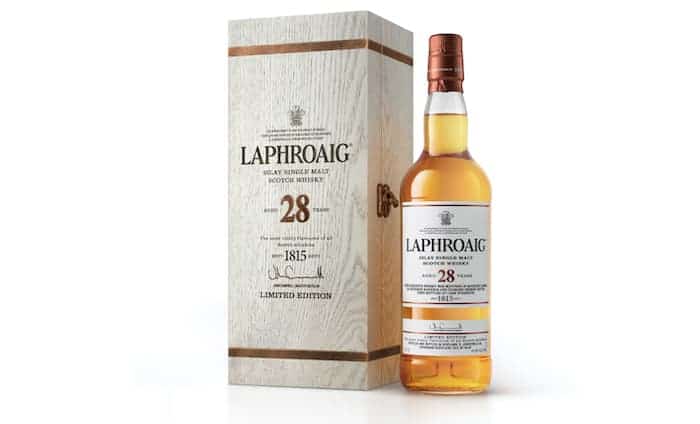 Nose: Unsurprisingly, you can smell this one a mile away. Surprisingly, it’s herbs, not peat, that hits first. Thyme, mint, oregano, and cumin seed jockey for attention at the starting line, followed up by smoky notes of camphor, pine-smoked tea, herbal salve, and bandages. Burnt rib ends and barbecue bark make an appearance as well, plus a faint note of juicy grilled peach.

Palate: Rather sweet at first, with fruity, aldehydic green apple and almost white-grape like bits evolving into a plume of resinous, aromatic smoke. There’s wet sweater, lanolin, fino sherry, and almonds. It’s quite warming—you really feel it in your chest—yet somehow also mild and rounded, with a long, aromatic Vicks Vapo-Rub finish.

I would say this is right on target for what most people think old expensive Scotch is supposed to taste like. I was pleasantly surprised by its savory herbal qualities, which lend a lovely transparent set of aromatics to an otherwise very maritime whisky. If forced to quibble, I’d say the palate, while engaging and focused, is a touch unstructured in the midsection (happens to everyone in their late 20s). Still, a delicious window into the evolution of this very special single malt.