One of the most recognized blended Scotch whiskies in the world has just been one-upped. What am I talking about? A higher ABV “director’s cut” edition, which has been designed to coincide with the release of Blade Runner 2049, starring Harrison Ford, Ryan Gosling, and Ana de Armas. This film is scheduled for release on October 6, 2017.

The corresponding special release whisky will have a limited availability of 39,000 bottles worldwide, with 27,600 of them going to the US. It is packaged in a futuristic box promoting the film. In fact, the bottle has undergone a very sharp redesign that is reminiscent of Ridley Scott’s first Blade Runner film. I can’t say whether it applies to the second, because the film has yet to be released. However . . . I wouldn’t be surprised if there is a scene with this very cool bottle at some point amidst the most exotically futuristic film sets that a $185  million budget can buy.

As I was sipping my glass of Director’s Cut, whilst looking through a Youtube “Drinking Montage” from the first Blade Runner film, I noticed that one of the bottles near the end of the film does indeed bear a diagonal label that’s similar to Johnnie Walker Black (regular edition). As for the Director’s cut bottle on my desk . . . it’s strikingly angular. Like other Johnnie Walker bottles, this one carries the royal coat of arms of the United Kingdom, complete with a lion and a unicorn.

But what of the whisky inside Johnnie Walker’s futuristic bottle? Does it measure up to all of the hype? Well, if you’re comparing it with the standard issue Johnnie Walker Black, then the answer is an emphatic, “yes.” At a higher ABV, this blend really sings. I appreciate the way Talisker and Caol Ila rise up through the “water of life” as it is breathes in one’s tumbler. Floating beneath those two heavy hitters, lies the secret to this blend’s smoothness. We’re talking about whisky from distilleries such as Cragganmore, Linkwood, Dalwhinnie, Glen Elgin, and quite a few others.

As for the grain whiskies that go into this limited edition blend, I tend to think some of them are older than one might guess–that is, in order to achieve such a well-coordinated nose and palate. While we’re on the subject, let’s not forget that grain whiskies come from continous stills, whereas single malt Scotch whiskies come from pot stills. It’s not easy to blend the two, and Johnnie Walker has done a great job of reaching a high “middle ground,” so to speak.

I will go on record as stating that the whisky in Johnnie Walker’s Director’s Cut, like Riddley Scott’s Director’s Cut of the original Blade Runner film, is more complex than its mainstream counterpart, and a lot of fun to explore. 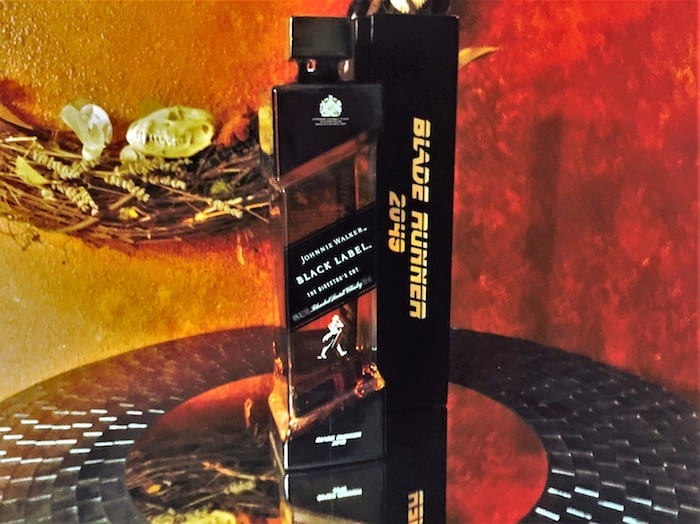 Appearance: Yellow gold with surprisingly nice legs and beading for a blend.

Nose: Far richer and more sophisticated than Johnnie Walker Black. Frankly, it’s amazing how over thirty whiskies could coalesce to make such a uniformly pleasing scent. I’m reminded of a 1996 Ben Nevis (Exclusive Malts) that I finished last month, although the Walker is a bit less “grapey.”

Far away Coal Ila peat is perhaps the most noticeable scent in my glass, followed by marshmallow nougat, honey, and crisp red apple. Golden raisins and figs aren’t far behind, along with a very subtle green tea note.

Palate: Think Johnnie Walker Black cranked up to “10.” There’s just more to taste in the Director’s Cut. I really do appreciate the higher ABV. Putting this whisky on the rocks would be refreshing, to be sure, but almost a shame. Try it neat first is my advice. As for adding water, no thanks. At 49% ABV, this stuff is as smooth as a pair of Sean Young’s silky pajamas.

The finish is medium in length. As for the swan song of flavors, one can detect black pepper, oak tannin, Caol Ila peat, and chicory lingering pleasantly. A spicy tingle outlasts the death.

I needn't remind you that this is a very limited collector's edition. Anyone who loves Blade Runner would do well to sock away a few of these bottles. As for fans of Johnnie Walker Black, this is a must-buy. I'm going to save most of the whisky in my bottle to take to a Halloween party. That's not because I don't like it. Quite the contrary. I can't think of a better present to bring that will make my friends happy.

In the immortal words of Rick Deckard: "Say 'kiss me'." I just love the hate scene in the original Blade Runner. Why not call it a love scene--when Deckard and Rachael kiss for the first time, and then roll around on the couch?

Because Harrison Ford and Sean Young were rumored to have been less than cordial with each other. I have no idea if this rumor is true, but the hot scene works very well on many levels. It's like "make up sex" on the first date.

As for this racy version of Walker Black, it's a winner when judged against other mass-produced blended Scotch whiskies. Two thumbs up.