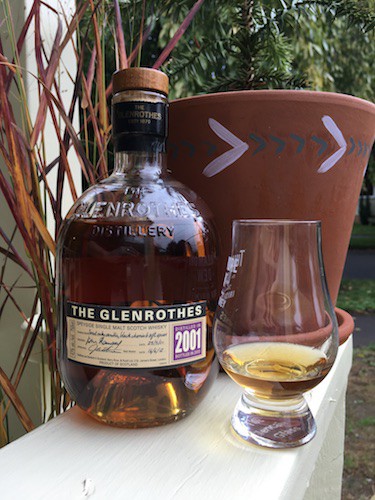 While I enjoy surprises when tasting a Scotch whisky I’ve never tried before, I usually expect to find aromas and flavors that generally remind of the cool, damp and rugged atmosphere of Scotland.

So, it’s both unexpected and refreshing when a Scotch takes my mind to a place on nearly the opposite side of the spectrum – a warm, sunny island – as The Glenrothes Vintage 2001 did with it’s scents and flavors of vanilla, citrus and a sweet, smoky woodiness that seems tropical, with a hint of sea salt and an occasionally overwhelming flavor of spices.

Vintage 2001, packaged in The Glenrothes’ distinctive short, stocky bottle, appears to be the most recent line of Scotch that is tied to the particular year when the distillery, owned by Berry Bros & Rudd, began aging the whisky.

The Glenrothes Vintage 2001, according to the distillery, was distilled in 2001, “selected from a variety of casks,” and bottled in 2012. As is the case with the majority of The Glenrothes bottlings there is not a specific age statement on the bottle; rather the Vintage represents the year it was distilled, not only as a marker of age but also reportedly to signify ” its peak of maturity, flavour and character.”

Vital Stats: Speyside Single Malt Scotch is packaged in the short, stout, 750-milliliter bottle The Glenrothes typically uses for its whiskies. It’s 43% alcohol by volume. Distilled in 2001 and bottled sometime since 2012.

Appearance: In the glass, it takes on an amber hue that is slightly on the darker side of Scotch.

Nose: Leads with a sweet, slightly tart blend of citrus and tropical fruits, tempered with slightly smoky woody aroma and a touch of salty sea mist, all of which takes me to a beach on a small Polynesian island.

Palate: Hits the tongue with a complex blend of sweet but earthy Madagascar vanilla balanced by the bitter, woody smokiness I find typical of oak cask aging. That gives way a building spiciness that turns into an onslaught of cinnamon and ginger, which then subsides into light burn around the edges of the tongue and the top of the mouth with a smoky sweetness towards the back of the mouth.

While not exceptional, The Glenrothes Vintage 2001 is a strong, dependable choice. It’s a bit too spicy for me, which I found limits its potential for a complex blend of flavors, it still has a enough complexity in its marriage of smoky bitterness and earthy sweetness to leave me satisfied.