Quinta Ruban hails from Glenmorangie’s Core Range, which also includes The Original, The Lasanta, and Nectar, D’or. Back a few years ago, the distillery produced a 12 Year Old expression, but that’s gone away so that NAS can reign supreme. It’s worth pointing out that an 18 Year Old Glenmorangie is still produced, but that one hails from the Prestige line of single malt Scotch whiskies, which are, well, more expensive, as well as more “prestigious.”

Quinta Ruban whisky is aged for ten years in American white oak casks before being transfered into Port pipes. Now, it’s worth pointing out that a pipe is the equivalent about about one hundred and thirty US gallons. It’s fairly large when it comes to cask sizes, and this translates into the fact that the resulting whisky should (theoretically) avoid becoming too sweet, as it would be in a smaller cask that had formerly housed a rich, sweet fortified wine such as Port.

I was curious about the origin of the name “Quinta Ruban,” and so I did a little sleuthing online. It seems that “Quinta” is a name in Portugal for the place where grapes are grown, especially grapes for Port wine. “Ruban,” on the other hand, is Gaelic for “ruby.” When you put the two together, you get a marriage between ancient and modern, as well as Scotland and Portugal. The “ruby,” of course, is all about this whisky’s lush deep red color, which comes from being aged for a couple of years in Port pipes.

I tend to like the name Quinta Ruban more since I discovered that Ruban is a Gaelic word . . . even though it was, in all likelihood, borrowed from Hebrew. Just because a word is ancient, doesn’t mean it originated from the people who once used it. After another thousand years pass, today’s American English will be ancient, as well, and yet it’s worth noting that roughly thirty percent has been borrowed from Latin, thirty percent from French, six percent from Greek, and about another ten percent from a ton of other languages–aside from Old English, which was a Germanic tongue.

Yes, that’s right: believe it or not, English has far more in common, historically, with Gaelic than it has with Latin, since both English and Gaelic are Germanic in origin. It’s amazing how many people these days think that English comes from Latin. No sir, it don’t . . . or may name is Odds Bodkins III. 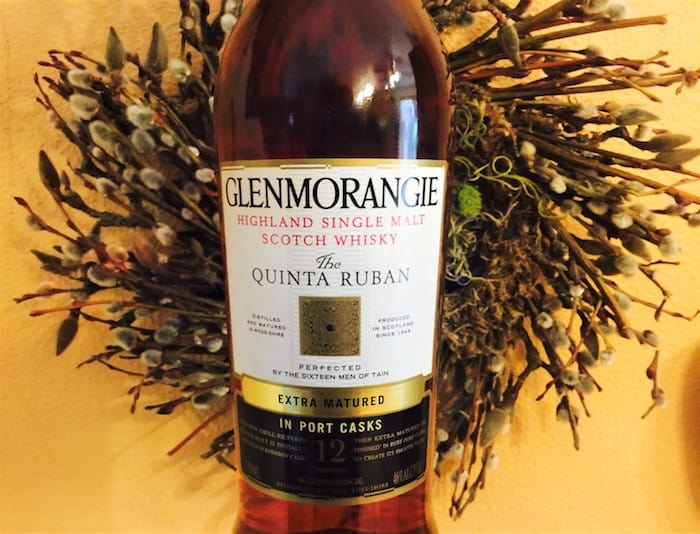 Nose: Fruity, to be sure. I’m getting a jammy type of impression at the outset, along with stewed plum, apricot, and peach. Hints of berry fruits emerge, as well. There’s a trace of cinnamon, clove, and buttery croissant.

Palate: Port sugars dominate with notes similar to the nose, except here in one’s mouth the fruit presence is fresher–more vibrant. Caramel, coffee bean, and marshmallow swirl into the mix. Powdered cocoa bewitches the tongue.

Finish: A faint oakiness flirts with allspice. Think orange marmalade on melba toast. Water does not help. Even a few drops seem to cheapen the superabundance of fruit sugars, so that nose and palate become forced–even trite.  Length-wise, the finish clocks in at medium.

Other reviewers have called the sweet nectar of Quinta Ruban "manufactured" tasting. I wouldn't go quite that far. But I will say the whisky is not terribly complex - or awe inspiring. When you get over this rather sizable hump (if you are a snob), then it's a fine entry level dram.

Would I drink the sauce at a party, or a bar? Yes, but I might be tempted to add ice - a practice that's pretty much taboo if I'm holding a glass of anything above entry level. Does that mean I'm a snob? Judge, if you must, but don't hate me. Even whisky snobs can be fun to invite to parties, especially BBQ's in summer time.

On a hot day it's quite nice to enjoy a chilled glass of uisge beatha. Temperatures in Portland, Oregon, my hometown, have pushed up into triple digits over the past week. In that sort of oppressive heat, I've tended to favor cold drinks of all sorts. Alas, when a room temperature glass of Scotch creeps up over eighty degrees, the plot thickens faster than Dickens. Frigida est sapeintia (in cold, there is wisdom).

I have friends in their 40's and 50's who thumb their noses at Quinta Ruban. Back a few years ago, they loved the stuff. This was around the same time when they'd first began collecting (and appreciating) single malts. Times change, tastes change, and clocks break. In a world where nothing lasts forever, let it be said that Quinta Ruban has held its own as a decent entry level Scotch whisky since it was first introduced about half a decade ago.