Editor’s Note: A previous version of this review inaccurately reported information on the distillery’s current refurbishment status as well as some details on the whisky being reviewed. The Whiskey Wash regrets the errors.

In Galloway, a cluster of stone buildings keep watch over the river Bladnoch. If you stumble upon this location on a walk or a drive, then you are very nearly at the doorstop of Bladnoch Distillery. Originally erected in 1817, it is one of the oldest distilleries in the Lowlands.

In fact, Bladnoch is the most southerly distillery in all of Scotland. This quaint setting reminds me of “The Shire” from JRR Tolkien Lord of the Rings trilogy. I’ve often wondered why marketing for the distillery doesn’t play up this aspect of its core identity. Even the rustic stone bridge that crosses the river, next to the main distillery, would look great on a picture postcard.

Bladnoch Samsara is meant to commemorate the refurbishment of the distillery, which is still on-going according to information provided to us by them. Originally placed into liquidation in early 2014, an Australian businessman named David Prior took over operations and kept the distillery open. Since that time much work has been done, and it is hoped commissioning of the plant can start next month. It is a total replacement of all the production equipment, together with a renovation of the distillery buildings and the 10 warehouses with a capacity at full production of 1.4m liters.

Taking its name from Buddhism and Hinduism, Samsara is a tip of the hat to the cycle of life, death, and rebirth. Although I’m not terribly keen on Scotch whiskies that are named after far away places and traditions, I can certainly see the relevance in this case. The commemorative offering is full-bodied and aromatic, being a marriage of malts from both ex-California and ex-bourbon casks.

As far as presentation goes, I really appreciate the sharp rectangular-shaped bottle, with a big over-sized cork-stop, which almost reminds one of expensive perfume bottles from the 1950’s. In fact, long after the whisky inside this bottle is gone, it would still make an attractive decanter. 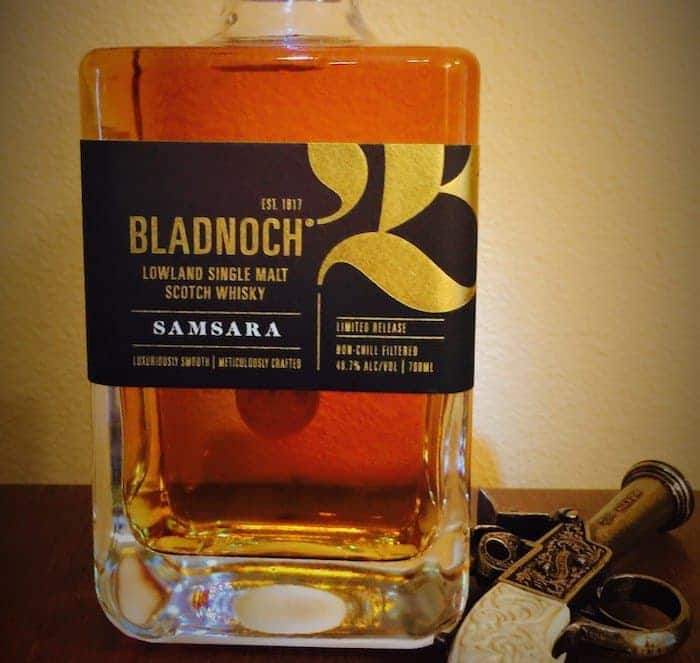 Vital Stats: Bladnoch Samsara; 700ml bottle; 100% malted barley; 46.7% ABV / 93.4 proof; a non-age statement release available both in Australia and also the United Kingdom as of the time this review was published. It should hit the US later this year.

Appearance: Burnished copper in color, with legs that run down the glass very quickly. No appreciable beading. The whisky is both of natural color and non-chill filtered in nature.

Nose: I was surprised to find that the familiar scents are almost absent from this Lowland Scotch. Instead of the usual bitter citrus and grassy distillery profile, something far more sweet, and almost pungent, comes though while nosing my Glencairn glass.

Yes, the typical distillery profile that includes a kind of yogurt creaminess is here in the glass. But it’s married to all manner of fruits. Wine casks seem to jump right out of my glass, offering orchard fruits like peach, nectarine, and plum. Then comes vanilla bean, along with a citrus character that is closer to lemon than orange, but perhaps somewhere in between.

Mouth: Nutmeg; dried Pinot Noir; ginger; apple tart; star anise; Challah bread toast, and cinnamon. The finish is medium and a bit hot, with a nod of the head to the wine casks. As I’ve already said, this whisky tastes a bit younger than might have been expected. Water brings out more oak, along with white pepper, and the scent of dried alpine flowers–almost like an early 90’s Clynelish. All of these qualities work quite well together, and would have improved with more time in the casks.

Blanoch is a distillery that gets my hopes up. I've tasted some amazing indie bottlings over the years . . . and yet, in all honesty, the OB's have tended to disappoint. If it's any consolation, I feel the same way about Auchentoshan. Indies from that place can really shine. In order to get me interested in an official bottling, however, it's gotta be 21 Years Old.

In my experience, there aren't very many "pretty goods" or "sort of bads" when it comes to classic old Lowland whiskies. And, yes, age matters. We have the right to be ageists when it comes to single malt Scotch whisky, especially when it hails from the Lowlands.

Samsara is a decent new start for the Little Distillery That could, though I do have some reservations on it. I wish David Prior all of the luck in the world.