Editor’s Note: This whisky was provided to us as a review sample by the BenRiach Distillery. This in no way, per our editorial policies, influenced the final outcome of this review. It should also be noted that by clicking the buy link towards the bottom of this review our site receives a small referral payment which helps to support, but not influence, our editorial and other costs.

“I love a Scotch that’s old enough to order its own Scotch” – Robin Scherbatsky, How I Met Your Mother

This expression from BenRiach Distillery is more than old enough to order itself. It’s old enough to even be cultivating its own whisky collection, and I would have to advise it to add itself to that collection.

Along with its slightly younger cousins, The Twenty One and The Twenty Five (reviewed here), The Thirty represents the “refreshed” older core range coming to us from BenRiach, a distillery with quite the age statement of its own. BenRiach has been around since 1898, though has not always been fully operational in that time, and has passed hands between several owners (currently Brown-Foreman).

Right now, under the direction of Master Blender Rachel Barrie, BenRiach is focused on maintaining its consistent “orchard fruit-laden” profile, while also pushing to create continuously varied products. Their huge cask selection is an incredible aid in this, allowing them hundreds of distinct casks that can be blended into thousands of new, sumptuous whiskies.

The Thirty is absolutely that. The stone fruit-forward signature of BenRiach is here, and certain notes pop out. Port is always a special treat in Scotch, common enough that one can get a taste for it but not common enough that we can really have as much of it as we like (or perhaps that’s just me). Sherry here plays well with the Port influence, creating fruit notes that weave through the whisky, flexing and transforming between different expressions of themselves, and adding darkness and spice to the whole affair.

But it’s the spaces in between that are the real treat, where any specific description of them would come across more like a perfume ad, indicating possible feeling and experience, but devoid of the more “useful” identifiers. This is an elegant whisky that is more than those identifiers, more than the sum of its parts. It’s like a symphony that, on the crescendo, loses all notes of violin or cello and simply becomes music. 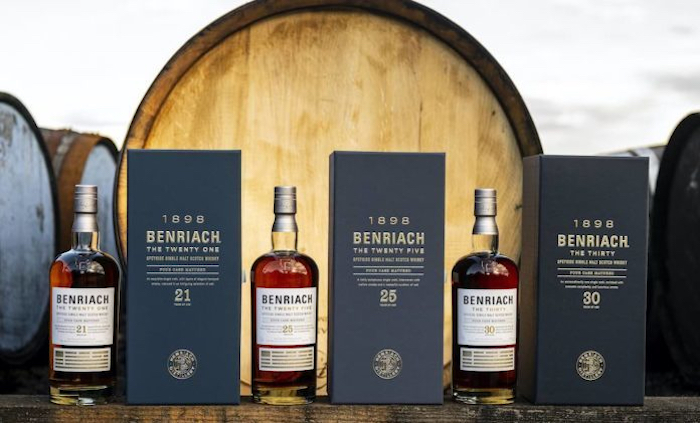 Nose: Warm and sweet, with a touch of salty sea air and a whiff of musk at the end.

Palate: Quite a heavy texture. A stone fruit medley leads off into some vegetal grassiness, with any bitterness tempered into spice, then comes back to fruit with sun-warmed peach. The peated element takes a bit to warm up, coming into the end of the sip as more of a pop than a lingering presence. A touch of cocoa at the end tones down the sweet brightness of the spirit.

The bright headiness of this expression emerges after the first, almost (delightfully) violent impact. If a symphony is for the ears, then this is a whisky for the tastebuds. At the price point, obtaining this bottle would be a stretch for many, but is not entirely inaccessible and compares favorably to Scotches of similar age. It would be a worthy addition to any budding or established collection.