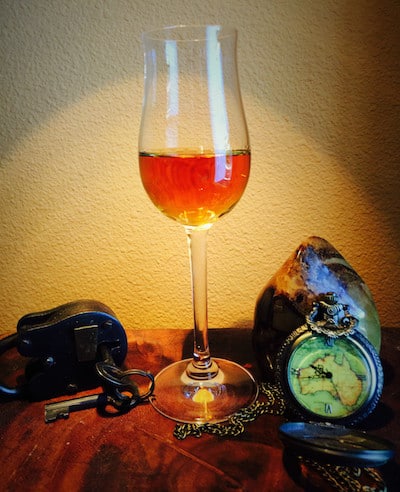 Although I’m not always fond of Benriach’s younger offerings, the older bottles are quite often magickal, offering a complex array of charms. In addition, I would like to raise a subject that is rarely broached in reviews, which I term “the head” of a whisky.

No, I’m not talking about a bunch of white foam on the surface! Rather, I mean, essentially, the mental “buzz” that is produced. Benriach’s older OB offerings, like this Benriach 35 Year Old, really do create a wonderful head-space in which to relax and stretch out. Time slows down, and life takes on a hazy golden hue of pleasure, which seems to hum in the machinery of body & mind (although not, perhaps, the soul). I’m not sure why, but the heady charms of this particular dram are noticeable, at least to me.

In the past, I’ve also dived into quite a few older single cask offerings, with generally promising results. That’s one of the things I really like about Benriach. This Benriach 35-Year-Old official bottling has been created to compliment its well known 25 year-old, which was introduced a decade ago, and won quite a few awards back in its day.

The Benriach 35-Year-Old also replaces the old 30-year-old, which was quite a bit less expensive.  These days, it’s hard to find the 35-year-old OB in the United States, and so most American drinkers have ended up settling on independent bottlings of older Benriach, while collectors have, by and large, snatched up older OB’s for their collections.

Nose: A heavenly marriage of fruit and wood exudes grace and charm. Scents of lovely balsa, papaya, delicate grapefruit citrus note, overripe banana, agave syrup, and high quality bourbon rise to the fore. Another wave of impressions follow, if one has the presence of mind to nose the dram from side to side, and back a little from the glass, rather than head-on.

It should be said of the dram in front of me, that all the above elements are united, quite remarkably, in conjugal bliss.

Palate:  Again, the integration is seamless and masterful. There’s so much going on! Upon one’s tongue, the fruit is not so prominent, allowing vintage oak and furniture polish to surface in the best of ways. I love the waxiness that comes next. It reminds me of a very old Clynelish, and also harkens back to the good ole Benriachs of decades ago.

Who says the best casks are gone? A decadent swirl of caramelly milk chocolate enchants the senses. Yes, the dairy note is nicely prominent, giving the dram a creamy satisfying mouth feel at full strength. On the back end, tropical fruit emerges with fresh mango, papaya, and guava. The fruit tastes overripe–almost jammy–due to sugars in the cask wood mellowing over time. Just lovely.

Not to be outdone, the finish hangs on like a sergeant. The palpable sense of time is here, imparting regal pomp and circumstance to old oak, in addition to a blush of sherry notes, which co-mingle with just the right amount of spiciness to balance out the sweetness. Yes, a little cinnamon bark is coming through now, and this accent helps to balance the overall impression.

On the death, one is left with balsa wood, along with a twist of sweet nuttiness, akin to marshmallow nougat.

For me, Benriach 35-Year-Old is a rare treat. It’s a little out of my price range, and hard to find in the United States. Over in the UK, it can still be located in quite a few shops, hovering up near $500 for a 750 ml bottle. By the time autumn rolls around, I wouldn’t be surprised if the price exceeds $500, especially as the British pound makes its inevitable come-back.

Of course, this will likely happen after Brexit histrionics have passed, and the Bank of England reveals a pair of gleaming fangs from out behind the tapestry. Presto: now you don’t see it, now you do! I also predict that the Euro will suffer, perhaps even more than the American dollar in time, and that will affect the price of this charming bottle of Benriach single malt Scotch. In other words, the time to buy is now . . . if you are so inclined.

Alas, alack, there’s really no substitute for Father Time, along with good whisky wash, and well-tended, high-quality casks. Sometimes the old adage, “you get what you pay for,” is true, but not always. In the case of Benriach’s 35 Year Old official bottling, unfortunately for many, the evidence speaks for itself. Money talks.