With a name like Bastille 1789, a distillery is almost certain to conjure images of the French Revolution in the minds of those who pass by a bottle in the store, particularly of Parisians storming the castle in 1789. As the fine print on a bottle of Bastille 1789 “celebrates the French Revolution,” it seems similar to a distillery in the United States calling itself Bunker Hill or Saratoga 1776 (not a perfect metaphor date-wise, but bear with me).

Yet, as with many products cloaked in patriotism, the relationship seems to end there, with no further stated inspiration from ideals like “liberty, equality, and brotherhood.” Never mind the logo’s use of a fleur-de-lis, a symbol practically synonymous with the French monarchy for centuries.

However, Bastille Whisky does claim to make a “a revolutionary new spirit” that is distinctly French, relying on the worldly experience and “savoir faire” of Master Distiller Jean-Marc Daucourt, according to the distillery’s website.

With about 150 years of family experience in winemaking and a family-owned vineyard and distillery near Cognac in southwest France, Daucourt worked for a time at a Scotch distillery as young man and has since travelled the world to better understand the craft, the website states.

Out of the same distillery that produces Moulin vodka and other spirit brands, Bastille 1789 makes two kinds of whisky: a single malt and a blended whisky. The latter is the focus of the following review.

While the distillery gives little information, ostensibly “leaving out some of the secrets,” the blended whisky is made with wheat and barley grown in northeast France, and limestone-filtered spring water from Gensac just south of the distillery.

The whisky has no age statement, but the distillery says it is given some time to mature and “finished in different styles of wooden cask” that includes Limousin oak, a regional tree with particularly expensive wood prized for Cognac aging. A more detailed analysis on Caskers specifies that the whisky is aged for five to seven years in casks of Limousin oak as well as cherry and acacia. 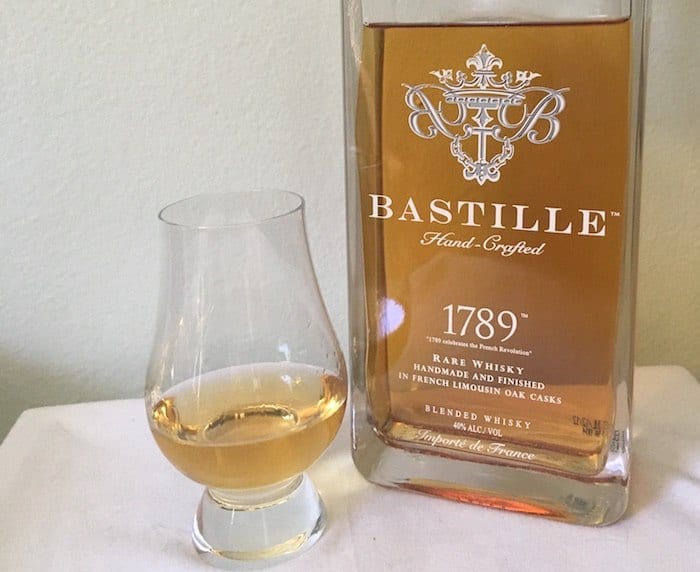 Vital stats: French-made blended whisky with no age statement, aged in a variety of casks, including Limousin oak, and bottled at 40 percent alcohol by volume. A 750-milliliter bottles is priced around $35 or so.

Appearance: Poured into a glass, a dram looks like a bright, golden amber, much lighter and more transparent than the average whisky, but still within the range of conventional.

Nose: An initial sniff carries a wave of what generally smells like a finely spiced citrus tart, with an undercurrent of sweet, slightly tangy orange overlaid with notes of cloves, cinnamon and a touch of ginger and lilac. Sniffing a little longer yields a more earthy combination of vanilla, clove, pepper and oak.

Palate: The first sip settles on the tongue like intensely sweet, yet smoky vanilla syrup. Within those basic flavors, notes of ground pepper and clove steer the combination in an earthier direction, while hints of sweet apple and pear balance things the other way. The spiciness grows a bit, but overall the sweet and earthy flavors maintain a relative balance until swallowing. At that point, the sweet vanilla with a hint of oak and smoke seems to wash over the mouth, but that’s slowly eased aside as tingles of clove and pepper gradually begin to tingle toward the back of the mouth.

That tingling sensation gradually builds in intensity for an unusually long minute or so, hits a crescendo of a dull roar, and then fades back the way it came to a syrupy vanilla coating on the tongue.

I’ll acknowledge that Bastille Hand-Crafted Whisky is remarkable and unlike anything I’ve tasted before. While it is intensely sweet to the point that it might qualify as a dessert all its own, it does so with a complex blend of flavors. I’ve had other whiskies that are similarly sweet, but I have not sampled many that are able to incorporate spices and earthier elements so that it tastes like more than woody liqueur.

That said, Bastille 1789 Blended Whisky is still a rich, sweet whisky. Those looking for something spicier, smokier or more robust may want to save this for another time. Or try it as part in one of Bastille’s suggested cocktails.