There’s so much to talk about with the Armorik Yeun Elez Whisky Single Malt label. It’s not a Scotch from Scotland, but there’s so much legend and lore around it that you might think it was. We’ll start at the top of the label and work our way down into the depths of the peat bog.

Brittany, France, is named after the Breton Celtic ethnic group that migrated to the area from the third to the ninth centuries. Brittany and its inhabitants are one of six Celtic nations. There are a lot of Breton legends in the Brittany area. The name Yeun Elez comes from an old swampy area that served as a peat bog until the mid 1900s. Legend says this swamp was the “gateway to hell.” It’s where they threw the souls that haunted the living.

As you walk into the Yeun Elez peat bog, it becomes more and more marsh-like, and one starts to sink into the earth. They say that some folks become lost in this way. People can fall into the door to darkness, perhaps by accident in the fog. Legends also say one could be thrown into the sometimes boiling “little porridge,” never to be seen again. Locals even claim to hear the howls of old souls that have been lost. Others say that these howls come from a star bittern, a member of the heron family of birds.

Now, we wonder why “Jobic” is also present on the label of this whisky and what it has to do with Yeun Elez. “According to the Yeun Elez legend reported by Anatole le Braz in 1893,” reports Spirited Zine, “it is the place where the evil souls who haunted the living were thrown into hell. Tadic-Coz, knew the secret and the ritual of locking the souls of ghosts in the body of a black dog. He instructed young Jobic to guide the dog towards the underworld gates. The latter, going from presbytery to presbytery, led the black dog to the rector of Commana. Together, at sunset, they threw the black dog into the Yeun Elez swamp, condemning the ghost to hell.”

One can visit this old swamp of legends. Yeun Elez has been preserved as a natural area and belongs to the Armorique Regional Park since 1969. 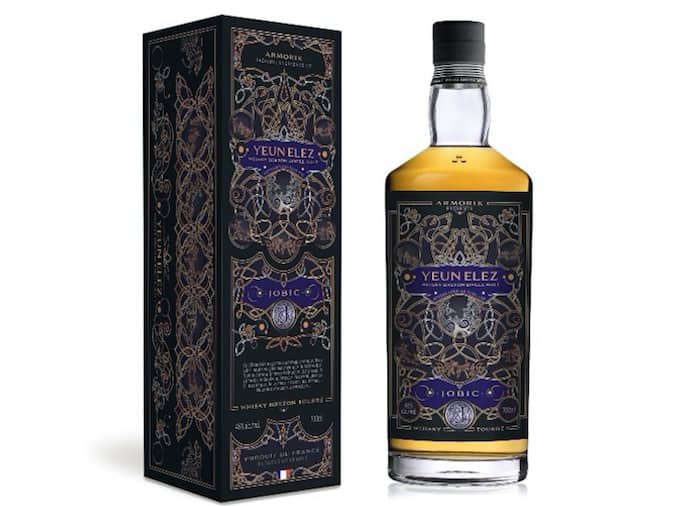 Vital Stats: No age statement. Single malt. Distilled, matured, and bottled at the Distillerie Warenghem, in Brittany, France. Yeun Elez is made with malted barley from Scotland that has been peated to a level of 50 ppm. Bottled at 46% ABV. $62 USD.

Nose: The nose is very light and refreshing. Close your eyes and your are standing on an ocean dune on a windy day. There are hints of brine, salt, peat, grass, and sea spray.

Palate: Upon tasting Armorik Yeun Elez Whisky Single Malt I detected peat, honeysuckle, lemon, camphor, grapes, and rhubarb. Both the nose and palate are a touch medicinal too. It’s very warming but not hot.

Overall this whisky is simple and light. It's floral and sweet. Sipping it feels like you are standing on the dunes by the bay while getting wafts of sea spray sent your way. Scotch lovers and those that tend to shy away from peat will both love it. It is definitely not as hellish as the name will have you believe. In fact, I would say it's quite heavenly.