Wow! What a time it has been getting to know Breton whisky. From learning of the history of the land and the culture of the people who have inhabited the region for millennia, to tracing the timeline of how all this relates to the story of whisky. However, no trip would be complete without bringing home a souvenir, and before we get into that let’s take a look at some of the things we have learned so far about the land  Brittany and the distillery that call it home.

The ancient Romans referred to this land as Armorica and we know this area today as Brittany. Brittany is recognized as the traditional homeland of the Breton people and is one of the six Celtic Nations.

While the different Celtic nations share a close history and geographic proximity, whisky making has obviously been part of the cultural identity as well. And, just as the ancient languages that are still spoken in these regions retain their individual cultural pride, so do their whiskies.

The Warenghem Distillery is currently located in Lannion, Brittany and has been producing liqueurs and spirits for over 100 years. Known for their Elixir d’ Armorique, the distillery passed from one generation to next creating a small range of unusual fruit- and plant-based liqueurs, honey liqueurs, apple brandy, beers and whisky. Thirty years ago, Warenghem became the first double distilled whisky produced in France, called Armorik as testament to the history of the area.

The whisky from this area, or “Whisky de Bretagne,” has certainly caught on and is now recognized with its own Geographic Indication. The particular environment around Warenghem features soil that is mostly granitic, and with it being less than six miles away from the sea, the air is also very iodized. The weather tends to be windy and rainy with the same humidity as the Scottish Highlands, but with the temperature being overall warmer.

With the use of French barley and water sourced from a natural spring known as Rest Avel (meaning “dwelling of wind”), Armorik aims to incorporate traditions as well region-specific advantages to create a product distinctly recognized as their own.

Armorik Single Cask Madère falls into  the “Limited Edition” portfolio from Armorik. This exclusive bottling was released in 2019, and availability is only in the distillery shop. This expression spent three years in former bourbon barrels and then another three in a unique Madeira wine cask. It may not be a refrigerator magnet, but sampling this should recall great memories of our time there. 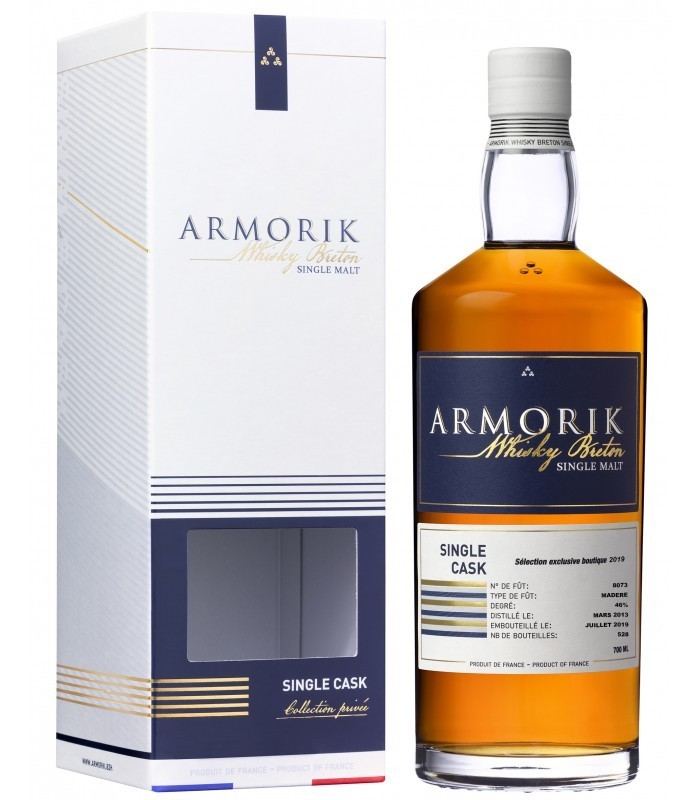 Appearance: Clear with a golden-copper color. A medium viscosity and very pronounced rivulets after a swirl of the glass.

Palate: Caramel, banana and a gentle heat welcome you at first sip. That’s followed by faint touches of smoke with a medium peanut brittle finish.

I enjoyed the more fall-like direction that this dram took me. But again, I think that this whisky would definitely be enjoyed to the fullest paired with food. This has made me long for some roast duck or glazed ham. I have a feeling that an actual visit to Brittany would necessitate investment in larger sized pants, but it would be worth it.