Editor’s Note: This whiskey was provided to us as a review sample by Ardbeg. This in no way, per our editorial policies, influenced the final outcome of this review. It should also be noted that by clicking the buy link towards the bottom of this review our site receives a small referral payment which helps to support, but not influence, our editorial and other costs.

Ever since 2011, Ardbeg distillery has sold an annual big batch special release near the end of May or the beginning of June. This year’s Ardbeg Day happened on June 5th. And the name to know is “Scorch.”

According to the Director of Distilling and Whisky Creation, this year’s release is “Ardbeg’s tribute to the legendary dragon of Islay.” Matured in heavily-charred ex-bourbon American oak casks, Scorch comes with tasting notes from Ardbeg that are not far off. I read them while I had my first taste. It was a pleasurable experience, to be sure.

Next to Alligator (the first Ardbeg Day release way back in 2011), this year’s offering isn’t as smoky, but that’s not really a fair comparison because Alligator had an ABV of 51.2%.

The Committee bottling of Scorch must be far smokier with an ABV of 51.7%. If I felt like paying the money, I would probably opt for that. Bottles can be found online for exorbitant prices, but auctions are selling it these days for around $250.

If you are looking for a peaty roller coaster ride, then 46% ABV Scorch might disappoint. As for me, I’m a “quality over quantity” man. My bottle of regular strength Scorch suits me just fine.

Both Scorch and Alligator from Ardbeg feature whisky aged in charred casks to help create their own unique form of smokiness. So they are indeed related to one another–if not literally then figuratively, since one bears the name of a real life animal while the other draws upon the power of myth (and a good deal more marketing). 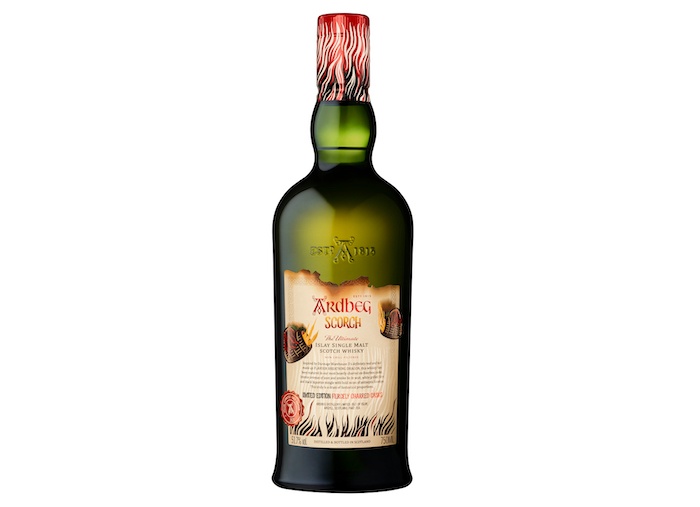 Appearance: Amber with eccentric beading (large clingy beads) that gnaw at the side of my glass like miniature dragon’s teeth.

Nose: Some classic Ardbeg notes here, including the typical peat, along with a haunting charcoal presence that is reminiscent of oceanic driftwood embers (there’s the toasted American oak!), vanilla pod, pine needle tea, allspice, aging cedar wood in a well-used sauna. There are also less prominent notes of black pepper and caramel nougat with peanut. Very nice. But let’s not forget cigarette ash in an ashtray (Nat Sherman MCD’s rather than more common brands with additives). I’m reminded of the old Peat Reek “Raw Cask” series from Blackadder (an independent bottler).

Palate: The low ABV runs slightly hot for only 46% but not overly so. Does that mean it’s fairly young? Yes, most likely, but Scorch doesn’t have the telltale “mescal/banana” note of an excessively young spirit. Charred barrels come through.

The resulting “smoke” isn’t all that strong when compared with full strength Ardbeg Day releases, or other especially peaty Islay drams. The palate has a nice, fat savory note that vacillates between smoked salmon and deviled ham, depending upon how I smack my tongue. But you can’t have salmon without a touch of lemon (in this case dried lemon zest). There’s a phantom note that reminds me of old Ardbeg Ten releases from the early 2000’s. Tannins from some fresh ex bourbon casks are also noticeable, along with a Honduran whole leaf cigar wrapper, and unsulfured molasses.

Allusions to Blackadder Peat Reeks, as well: the good ones, not “off” bottlings. Who knows, but I’m fairly sure a few were Ardbegs, especially the really old ones. How well I remember floaty sediment in the bottoms of bottles that took guts (or madness) to swallow. Of course, there is no sediment in Scorch; I’m merely reminiscing about how the whisky shares its most bombastic of flavors with the aptly titled “raw cask” Peat Reek series, which was touted as being “old school.”

The finish brings cigarette ash and new tire rubber, along with that classic smoked peat of all things Ardbeg. Speaking of which, the smokiness in Scorch tastes more “old school” than most special releases over the past eight years. This said, the finish is barely medium in length. At the death, my tongue is left with a phantom note of black pepper that creeps toward the tip. Any time a whisky moves around in my mouth like that, I enjoy it. Why? Because that’s kinda weird in a cool way. Often, older scotches are the ones that “take a walk on the wild side.”

No Need for Crocodile Tears

I guess in the final analysis, I might as well compare Scorch with Ardbeg Ten, as well as with Ardbeg Uigeadail. It’s worth buying one or two bottles of Scorch if the opportunity arises: drink one, and save the other for the 2030’s when industry standards for whisky will most likely have fallen even farther than they have since 2011. But if you can’t find a bottle of Scorch, there’s no need to shed crocodile tears. You can come out ahead with some of Ardbeg’s official bottlings, which still taste quite “special” to me. With this in mind, let’s get down to what’s what.

The first question that naturally arises is whether Scorch is better than Ardbeg Ten. My answer: “That depends.” Ardbeg (thankfully) keeps to its time-honored tradition of varying batches of its ten year-old peated scotch whisky. If you buy an Ardbeg Ten in 2021, it won’t taste the same as my favorite batch, which was released in March of 2014. To say the March 2014 batch was “yummy” is an understatement. These days . . . Ardbeg Ten is not bad at all, and it certainly holds its own against any other Islay peated whiskies in the same price range.

A bottle of Scorch is far better than the last few years of Ardbeg Ten releases, however. But is it better than the March 2014? No, I don’t think so, if memory serves. But who can find one of those in 2021? I’m fairly sure it had some older whisky in it. Isn’t that often the rationale as to why a certain batch hits a home run out of the park? Well, at least that has been the case with Ardbeg for those elephants that remember. Because back in the early 2000’s, I became accustomed to “Tens” with some wonderfully mature Ardbeg whisky blended into the batches that was far older than a mere decade.

Moving right along . . . is it fair to compare Scorch with Uigeadail? Well, it’s true that Uigeadail would technically be more accurately compared with the Committee edition of Scorch (both have significantly higher ABV’s). Be this as it may, I still think it’s fair to make the comparison, at least in the sense of one’s pocketbook and the time required to search for a bottle of Scorch. Plus, there are the additional factors of market availability and price. Uigeadail is quite a bit cheaper than Scorch. It often tastes younger, however. And it hasn’t been aged in charred casks, either.

With these drawbacks mentioned, I still would be fine with a bottle of Uigeadail if I didn’t feel like fighting hoards of Ardbeg fans for a chance to own the latest special release, or venturing into the online world of auctions. There’s something to be said for such a “zen-like” form of restraint, especially when supply is down, and demand is up, up, up…a market dynamic that inflates prices. Come to think of it, dragon slayers embody the virtues of wisdom and prudence, if I’m not mistaken. This begs the question, “What is the dragon in this case: an admittedly delicious smoky whisky, or a corporation that breathes sparks of desire into consumer’s minds until they MUST HAVE the broth?”

So what is the final word from this "draconian" review? Buy Scorch if the opportunity presents itself. If not, then settle for a bottle of Uigeadail and call it good.