Editor’s Note: These whiskeys were provided to us as review samples by Leatherwood Distillery. This in no way, per our editorial policies, influenced the final outcome of this review. It should also be noted that by clicking the buy links in this article our site receives a small referral payment which helps to support, but not influence, our editorial and other costs.

Andy Lang spent more than 25 years in the Army, much of it as a Green Beret. He once fermented pieces of bread and melted Skittles from MREs in Kuwait to make alcohol that tasted, he says, like liquid Jolly Ranchers. Another time he packed a homemade still labeled as a “water-purification system” into Afghanistan with his special forces team, where they distilled sweet feed intended for mules and colored it using charred branches from trees near their mountain camp.

“I usually had a waiting list to get on my teams,” Lang says with an oversized grin.

Lang chatted with us over a zoom call on a recent Friday afternoon while he monitored the still and walked the warehouse at Leatherwood Distillery, which he founded in Pleasant View, Tennessee, upon retirement from the Army in 2017. He said he generally feels more kinship with the moonshiners of old than he does with big, commercial bourbon outfits.

He concedes that he does intend to replace Leatherwood’s 175-gallon still and mash cooker with 800-gallon versions and that plans are in the works to extend the distillery’s distribution to Kentucky and Florida. (You can only get it in Tennessee at the moment.) But that’ll be just about the end of any expansion.

“I learned this on my own at home, and I do everything the same way I did back in my garage,” he says while lifting the lid of the mash cooker and pointing his phone camera down into a batch of rye. “We’re going to keep it that way. We’re not going to expand to the point where we’re making thousands of gallons at a time.”

If you look at the Leatherwood website, you’ll find at least 15 spirits in the lineup, many of which are different types of moonshine made with everything from elderberries to jalapenos to coffee cream. There are also a couple of bourbons Lang releases using MGP-sourced whiskey and distributes through partnerships with outside entities. (Including Talk ’n Shop Bourbon for professional wrestlers Karl Anderson and Doc Gallows.)

Most of Leatherwood’s production, though, goes into its trio of signature whiskies: Snake Eater Bourbon; Check Point Rye; and a sweet feed whiskey Lang says is fairly close to what he was making in Afghanistan using mule feed and a homemade still not long ago. All three he distills, barrels and bottles on site in Pleasant View, not far from Nashville.

He buys new American oak barrels for the bourbon, then recycles those to use for the rye and, finally, cuts a hole in one end of the barrels so he can add charred French oak chips for the two weeks the sweet feed whiskey will age. (That’s not finishing; two weeks is the entirety of the aging process.)

“When it tastes good, I stick it in a bottle and it goes onto a bar,” Lang says of the whiskies, stopping from his walk around the warehouse to plug the phone in, since his battery is about to die. “I think a lot of that aging and barreling other companies talk about is marketing, anyway. This doesn’t have to be complicated.” 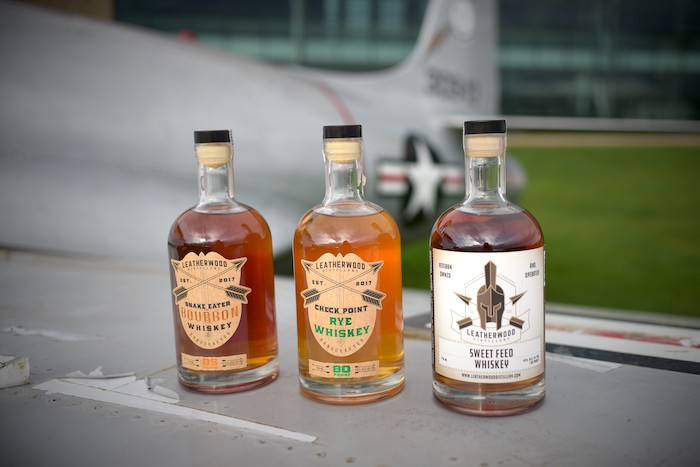 Appearance: Relatively light, orange and yellow like the skin of an apricot. The legs are thin, and drip away almost immediately.

Nose: A little boozy up front, even after you’ve given it time to settle. Behind that, though, are hints of honey and mint.

Palate: Lang says he likes “a lighter, sweeter bourbon,” and this one does go down easily. As a wheated bourbon, it’s definitely mellow and easy-drinking. I taste mouthwash, cloves, mint, tobacco and black pepper.

Final Thoughts: Lang says he ages some of the bourbon in 53-gallon barrels and some in 25-gallon barrels. It depends upon the batch, but he often takes the juice out of the larger barrels after a year and a half while allowing the smaller barrels to continue aging for another six months.

He’s hoping to get fruity flavors from the 53-gallon barrels, mixed with more char and wood from the 25-gallon barrels. He says he likes to drink it in Old Fashioneds, which I think sounds pretty good. It’s a little young to drink neat for my taste, but would probably make a nice mixed drink. Especially for the price point.

Nose: There are sweet, fruity notes here. The relatively low-rye mash bill means the rye grass doesn’t hit you as hard as it would with many other whiskies. Think cinnamon and ripe peaches.

Palate: The spicy, vegetal flavor you expect from a rye is apparent. It’s mellow and goes down easily, but it’s still there. Dried fruit and pecans, too. But everything fades quickly – which, Lang says, is by design. There is no long, lingering finish. You get a mouth full of rye grass, and it disappears as quickly as it was there.

Final Thoughts: Lang says he had to be convinced to start making rye, and ultimately tried to make one that wasn’t especially rye-like. “If I’m going to make it, I want to drink it,” he says. “So we went with 66% rye rather than a higher percentage. It worked.

It has enough nose and flavor that you know it’s a rye, but it goes away real quick. It’s mellow.” As someone who appreciates a good rye, I was frankly left wanting more. But what is here is drinkable and pleasant, and it comes at an attractive price point.

Appearance: Darker than the other Leatherwood whiskies, despite only two weeks in the barrel. A light brown tint.

Nose: It smells like no other whiskey you’ve had. Brings to mind Flintstones Vitamins and wet wood.

Palate: The lack of time in a barrel probably has as much impact on the flavor as does the mash bill. This is very close to raw, white dog whiskey, and it goes down easily. It certainly lacks the wood-inspired flavors you’ll more often get in bourbons and ryes. Although flaked oats make up a small part of the mash bill, there are some similarities to oat-grain whiskies.

For the most part, however, this is just an unaged whiskey. It tastes like it could be running clear and coming straight out of the still – which isn’t far from the truth. Brings to mind movie theater popcorn (extra butter) and graham crackers.

Final Thoughts: Sweet feed is typically something you buy in 50-pound bags to bring balanced nutrition to your horses, cows and goats. Or, if you’re a Green Beret in the mountains of Afghanistan, your mules. It offers a mix of grains along with molasses, vitamins and some kind of protein. Not, in other words, your typical whiskey mash bill.

But, says Lang, sweet feed has a mix of grains that actually work pretty well in fermentation – hearkening, again, back to moonshiners of an earlier era, who used whatever was at hand. “Nobody’s ever heard of sweet feed,” he says. “There are so many grains in there. It’s intense.”

As I wrote above, I think the best gauge of whether you’ll enjoy this is how you feel about white dog whiskies from Buffalo Trace or elsewhere. If you like the vaguely moonshine, fresh-out-of-the-still, boozy flavor, then you’ll probably enjoy the heck out of this, too.

The sweet feed mash bill is a novelty, but the key may be that you’re essentially getting an unaged whiskey. Lang does a good job with it, it’s affordable and it goes down easily. The moonshiners of old would be proud.