Editor’s Note: These whiskeys were provided to us as review samples by Boulder Spirits. This in no way, per our editorial policies, influenced the final outcome of this review.

It is of no surprise that world class whiskey is now coming out of Boulder, Colorado. Known for the craggy rock formations at the foothills of the Rocky Mountains, University of Colorado, art galleries, restaurants and Planetarium, the city has a creative economy and community. Back in 2008, an old school brewer turned distiller by the name of Ted Palmer started Roundhouse Spirits. Experimental gins, agave spirits and liqueurs turned some heads and drew attention to the Boulder bubble.

Enter Alastair Brogan. The proclaimed ‘Chieftain’ was a jack-of-all-trades in Scotland. Part of the Scottish military and later running a fuel distribution company, Brogan moved to the United States with the second-half-of-life dream to make whiskey. Purely fortuitous, Brogan and his wife moved to Colorado in 2011 and met with Ted. Joining forces and solving a potential naming rights issue, Roundhouse Spirits became Vapor Distillery in 2015.

The distillery grew large and fast in the first two years of production. Installing a 1000 gallon Forsyth still and creating a 40 barrel brew house was the first big task. At the time, it was the largest copper pot still in Colorado. Gin production grew as whiskey was put away. As the brewhouse was being built, the distillers experimented with using mash from local breweries such as 4 Noses Brewing Company, Fate Brewing Company and Tommyknocker Brewery.

Alastair Brogan’s goal however was to create a single malt that is ‘unique to Colorado with a Scottish accent.’ According to Ryan Negley, Brand Ambassador and Sales of Boulder Spirits, the first whiskey laid down was the Boulder Spirits American Single Malt-Peated. 100% grown and malted in the UK by Simpsons Malt, it is a light peat.

From here like their other Single Malt expressions, every step of the process is done within house. Mill, mash and a ferment of a minimum of 36 hours before distillation is a rarity within the American Single Malt industry. This is a testament to the drive of Brogan and the team over at Boulder Spirits/Vapor Distillery. This level of detail goes into their ‘barley forward Bourbon’ as well and has paid off with some awards at BTI and the San Francisco Spirits Competition in the last two years.

In 2020, Boulder Spirits is a leading member of the growing American Single Malt Commission despite that never really being the intention. ‘Alastair is out to create the best whiskey he can with this 1,000 gallon Forsyth. We’re all for creating these new flavors of distinctly American whiskey, each with our own mix of flare and secrets. Lo and behold by the time our whiskey was ready, the single malt movement is happening,’ said Ryan Negley.

So how does Boulder Spirits mature their whiskey? Well, the majority of maturation occurs with char three new American Oak barrels with little temperature control. Proofing of the whiskey is actually done with water from Eldorado Springs, a famous local canyon. 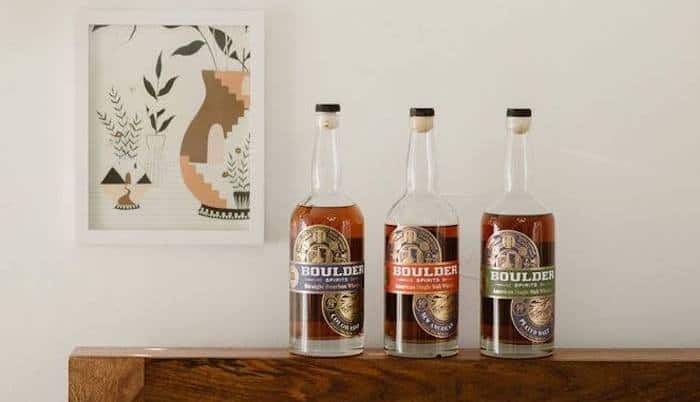 Palate: Grilled nectarine, campfire with notes of vanilla and lemongrass