Barrell Whiskey Private Release is a very small scale series. Each blend is very precisely controlled in a detailed blending experiment that takes months to perfect. For every barrel, the recipe is different along with the choice of barrel. These single barrel experiments are then released to the public as micro blends. This is the first in company history.

For each experiment in the Private Release series they begin with Kentucky whiskey, the oldest being 18 years old. Once these recipes are sampled by hand and palate they are put into a single cask for maturation. Most of the barrels used once contained other spirits such as wine, rum, and brandy.

Since these barrels are released as micro blends they can be very hard to get ahold of as the quantities are extremely limited and distribution is small. It’s possible that only one state will get a certain blend. If you find one you like, don’t hesitate to buy more than one bottle as you may never see that bottle or blend again. It is possible that there will be another with a similar recipe though. 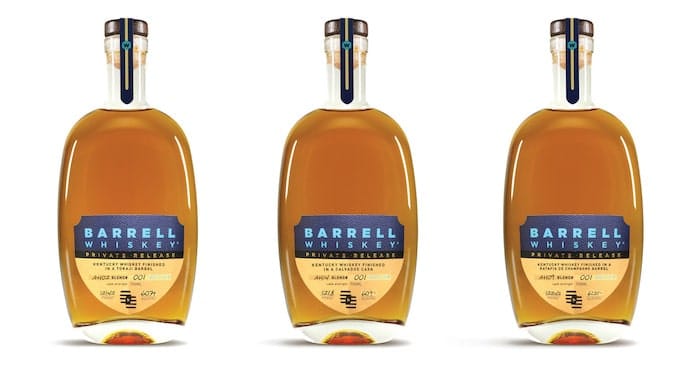 Vital Stats: AH08 is a blend of KY whiskeys, the largest component being 18-year-old KY whiskey, finished in a Malmsey Madeira barrel; 118.98 proof

Nose: The nose is very approachable and sweet with hints of vanilla, caramel, pear, and apple.

Palate: When sipping this blend of Barrell Whiskey it’s like a roller coaster, it goes from sweet to hot to a harsh whiskey bomb. It’s has a heat but it’s also sweet with citrus and apple.

Final Thoughts: I felt that this blend was too hot and tingly on the tongue. It has a very nice sweet start, stimulating middle, and a syrup finish. It’s slightly silky and thin.

Vital Stats: AH14 is a blend of Kentucky whiskeys, the largest component being 18-year-old KY whiskey, finished in a Calvados cask; 121.8 proof

Palate: There’s a strong heat as the whiskey enters your mouth then turns to pepper and maple with hints of chocolate.

Final Thoughts: There’s a limited flavor profile. It’s hot yet smooth which is a nice combo. There’s definitely a heat with the proof. The mouthfeel if thin and watery with a soft pepper, fruity and lemon combination.

Vital Stats: AH22 is a blend of Kentucky whiskeys, the largest component being 18-year-old KY whiskey, finished in an Indiana Rye barrel; 121.28 proof.

Nose: AH 22 had the most earthy nose of all three. The glass wafts of hay, grass, and nail polish with a sweet, apple syrup. It’s like you are on a picnic with apple pie in the country.

Palate: It’s very boozy with a strong alcohol flavor and a side of grass and earth. The middle gives you some more sweet apple flavors with a little caramel but the finish goes pack to pepper and heat.

Final Thoughts: There’s not a lot of flavor but it’s clean and simple. The alcohol is not overwhelming and there’s a great light taste that’s not complex. The pepper and syrup is the strongest flavors that come through on the sweet, yet hot flavor coaster.