Woodford Reserve hails straight from the historical source of whiskey in the United States, Kentucky. Their distillery is located outside of the town Versailles, built on the site where in 1812, Elijah Pepper first began distilling what we would recognize as bourbon and rye whiskey today. After Elijah died, his son Oscar took over operations of the building, and employed James Crow as his master distiller. James Crow famously produced Old Crow Whiskey in the same distillery, a staple in bar wells across America. Woodford Reserve is very proud of the history of the land, and looks to honor traditions while cultivating innovation.

Woodford Reserve Batch Proof is a part of the annually released Master’s Collection. The Master’s Collection looks to highlight one of five components of distillation with each release: water, grain, fermentation, distillation and maturation. Their Batch proof releases showcase the maturation of the whiskey in the oak barrel. Another previous release featured the same whiskey aged in two different oak barrels to highlight the terroir. The Master’s Collection is an interesting way to look at whiskey, and to really dig into the impact that each of those five elements will have on the flavors of the spirit.

Their Batch Proof uses the same mash bill as their regular 90 proof Woodford Reserve, but gets blended and bottled without any dilution. The 2019 offering, reviewed here, comes in at 123.2 proof. The 2018 release was slightly more potent, at 125.8 proof. 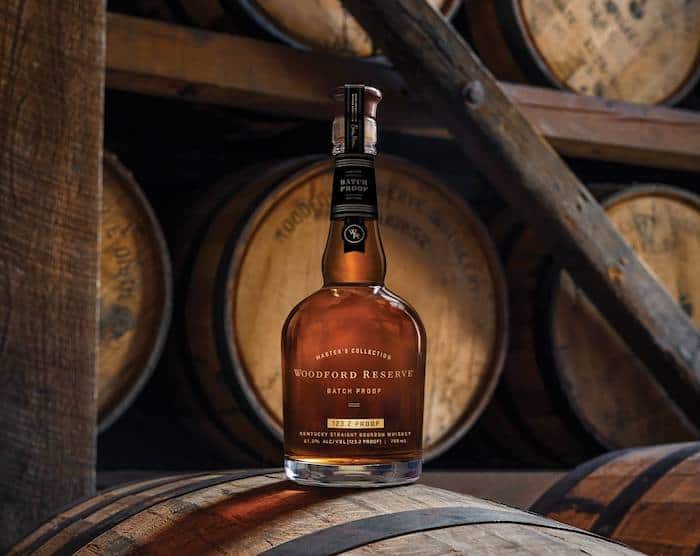 Appearance: Deep coloring, almost red like a henna tattoo before it’s dry. Significant legs, tough and thick. Woodford Reserve took their traditional  and turned the intensity to the max. Their batch proof is an amplified version of what we think we know about whiskey.

Nose: Fruity, with notes of citrus and ripe plantain. Semi-sweet notes of chocolate covered cherries. There are also more savory scents: oak and wet, moss-covered stone. It’s complex but balanced. The nose is really pleasant, with a slight bite. It’s an exaggerated version of the traditional, with fierce notes that attack the senses, but instead of using weapons, it’s attacking with nice hugs.

Palate: Starts off sweet and nutty, builds in to bold, bitter dark chocolate. The sweetness builds with figs, peaches and clove cigarettes. There is a slight burn, but it’s not a face-melter, which is a hard line to walk with such a high proof. Woodford is walking that line with ease. Notes of caramel, copper pennies, leather and coffee on the finish. There’s a nice minerality to the flavor that’s carried throughout.

Woodford Reserve Batch Proof 123.2 is one of the best whiskies I've ever had. It has heroically bold flavors that are balanced and it's really easy to sip despite its very high proof. It's almost a dessert, it's so decadent. I only got a tiny sample, and I savored every drop. Pairs well with steak, pork, and savory winter flavors that can stand up to the spirit's huge personality.