Editor’s Note: This whiskey was provided to us as a review sample by Wiggly Bridge. This in no way, per our editorial policies, influenced the final outcome of this review. It should also be noted that by clicking the buy link towards the bottom of this review our site receives a small referral payment which helps to support, but not influence, our editorial and other costs.

Wiggly Bridge Distillery was founded in 2013 and is a father and son team in York, Maine. David and David Woods decided to start a distillery in their hometown, even building their own copper-pot stills. Quality is important to them in everything they do. They feel that all the dents and angles in the stills just adds to the superior flavors.

The Woods started the distillery after a “let’s make our own whiskey” joke at a family dinner. It’s no joke that starting a distillery is a lot of hard work especially if you focus on small batch spirits like they do. They call it a labor of love and they’ve won numerous awards for their hard work. The distillery is small and they like it that way.

Not new to running a business, the elder David Woods has started numerous businesses in York. With each business he puts a lot of care and attention into them. The distillery is no exception. Woods experiments and tests many recipes and is always striving to improve. His son, a self-taught welder, loves to figure out how things work and has reliable taste buds. It’s a perfect match for great products.

Wiggly Bridge Bottled in Bond Bourbon is just one of their whiskey offerings. They also offer a small batch for those that don’t like cask strength whiskey. If you’re into quickly aged, white whiskey they also have one of those. Each Wiggly Bridge Whiskey is built around the same mash bill and fermentation. The aging and proof are the main differences but the tasting notes reveal some other differences. 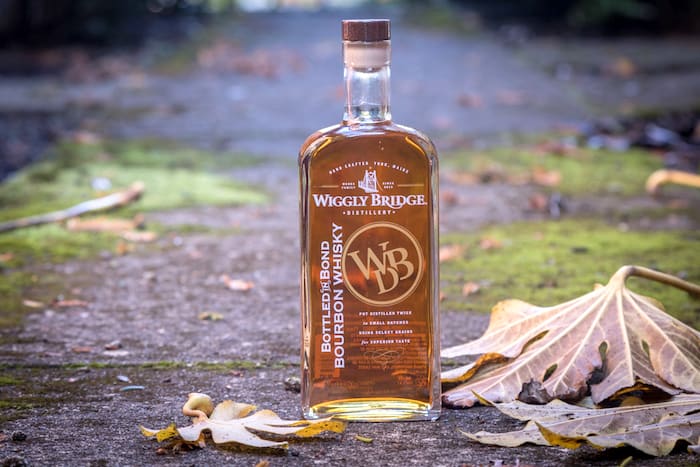 Nose: It’s subtle with floral and citrus. The fragrance is faint and not overpowering. There’s a sweetness of honey, vanilla, and brown sugar.

Palate: The flavors are light, thin and a little prickly. There’s pepper, smoky citrus, plum and kumquat. The finish has a bit of a pepper burn but it’s tempered by the candied sweetness.

Overall the balance of pepper and sweet is very nice. Wiggle Bridge Bottled in Bond Bourbon is hot and pleasant. It tastes of a classic bourbon. The pepper tingles your taste buds while the simple syrup coats and smooths the burn. Some might say it’s a bit prickly but in a really nice way. It’s tangy, sweet, and peppery. The mouthfeel is light and thin but very balanced.