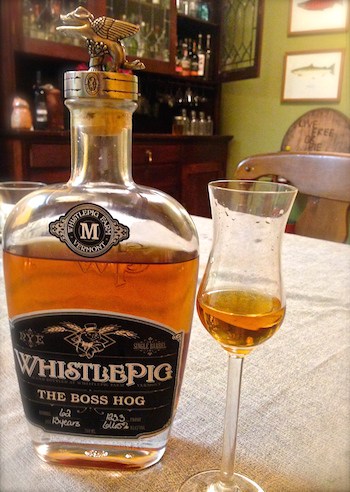 WhistlePig’s barrel-strength whiskey The Boss Hog “The Spirit of Mortimer” is, from start to finish, an extravagant experience. Topping the cork is more than a quarter pound of cast pewter in the shape of a winged pig leaping over a sheaf of rye, one leg kicked up jauntily behind it.

The matte black label gives the bottle a kind of tuxedo-and-tails formality, and the handwritten barrel number, age statement, proof, and ABV are in the kind of metallic silver gel pen that was very popular in the mid-90s among a certain kind of fourth-grade girl.

With its eye–popping price tag ($189) the presentation of this WhistlePig Boss Hog expression calls to mind a turn-of-the-century Robber Baron settling in for a stiff nightcap after finally acquiring a particularly troubling competitor and then firing the entire staff.

The contents of the bottle are ostentatious in their own right: 13-year-old 100% rye bottled as single barrels without dilution, ranging from 118 to 124 proof depending on the barrel. The Boss Hog was first released in 2013 as a 12-year-old expression, sans ludicrous metal pig cork and about $40 cheaper.

Though the WhistlePig bottle touts its Vermont roots with obvious pride, the whiskey in the bottle is sourced from Canada (which, if nothing else, should make us all consider taking Canadian whiskey a little more seriously). WhistlePig’s blog reveals they’re getting their still installed later this month, so we can all look forward to tasting some of their first true farm-to-glass spirits in about 2025, if they stick to their current age statement spread.

My review sample is from barrel number 62, aged 13 years, and bottled at 123.3 proof (61.65%). Boss Hog is a whiskey that desperately needs water. It’s worth tasting a small sip straight just for the wasabi-like sinus-clearing alcohol wallop, but it’s just too hot and too tight to enjoy much without a little dilution.

Flavor: With water, gentle on the entry but then rapidly building to a strong rye spice accompanied by dried stonefruit, butterscotch, maple, and caramel popcorn. Finish is rich and lingering.

This is an amazingly tasty whiskey. Judging by flavor alone, it would be easy to recommend. The staggering price tag makes it a little more difficult to swallow, but don’t turn down a glass if your Robber Baron uncle is buying. 94 Points