Whiskey Review: Two Stacks Dram In A Can

Editor’s Note: This whiskey was provided to us as a review sample by Two Stacks. This in no way, per our editorial policies, influenced the final outcome of this review. It should also be noted that by clicking the buy link towards the bottom of this review our site receives a small referral payment which helps to support, but not influence, our editorial and other costs.

It’s a can perfectly proportioned for a toddler. Stout. Sturdy. Green. The average parent, though, wouldn’t let their kids drink what’s inside (at least not very much of it). Because what’s inside is Irish whiskey.

I give you Two Stacks Dram in a Can from Dundalk, Ireland. Two Stacks also package their flagship sourced whiskey in a conventional 750mL glass bottle. They spent the pandemic developing the canned version and released it in the US near St. Patrick’s Day, following the style of the hour with a virtual ‘Lock-In.’ (For those unfamiliar, a ‘lock-in’ occurs when pub patrons are locked in after hours to continue merrymaking with music and drink.)

Other whiskeys have come in cans, but not a bunch. We reported on some a handful of years back, including Scottish Spirits’ blended whisky and Mexico’s Williamson 18. Whether these are actually available now or artifacts of the Internet is hard to tell. Both were a larger format can.

There’s also the Stillhouse line of lighter-fluid-esque flasks containing white dog and various natural flavors of white dog. Their idea was to shake up the industry by getting people to think differently about what whiskey meant, and the first step was to ‘clad their spirits in shining armor’ (pretty good line, right?).

So, Dram in a Can isn’t the first canned whiskey, but it’s definitely the cutest. At 100mL, these cans are eminently portable and just the right size to share with a friend (if you’re feeling generous).

In the US, Two Stacks Irish Whiskey comes under the umbrella of High Road Spirits, who import a couple dozen niche spirit brands from Japan, Haiti and Italy, among others. High Road’s portfolio focuses on family-owned companies.

In the case of Two Stacks, it’s the three men (Liam, Shane, and Donal), who also make up Ireland Craft Beverages. As ICB they’ve been helping distribute Ireland’s beer, whiskey and gin around the world. After having a hand in that side of the industry, they decided “The time was right to launch our own brand of Irish whiskey with the goal of selling something that we’ve had a hand in producing.”

Let’s find out how they did, shall we? 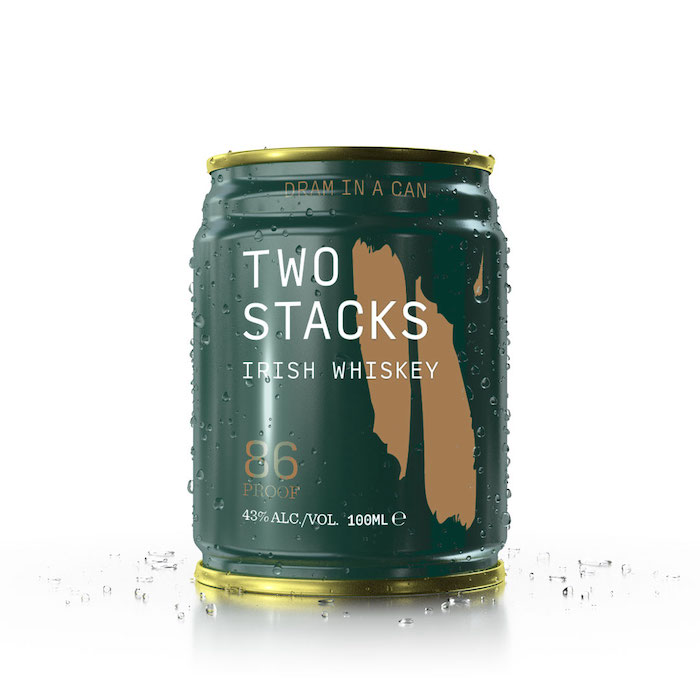 Tasting Notes: Two Stacks Dram In A Can

Appearance: This whiskey is a very clear, pale gold that forms fat tears.

Nose: On the nose, it’s gentle, with stone fruit and salt air and a scoop of brown sugar.

Palate: The palate is crisp. Everything about it is smooth; the stone fruit blooming into apricot and the brown sugar clarifying into toffee and hazelnut. The finish is clean as well, opening the door to the next sip.

This whiskey is really successful: just what you'd expect from an Irish dram: light, fruity, tasty. The fact that it comes in a can makes it even more lovable. And it suffers nothing for it. I took a can to the coast and I would take one to a mountain top. Two Stacks is well poised to support some laid-back summer drinking.

4
User Rating ( votes)
Sending
Shares
2.8k
Views
Share on FacebookShare on TwitterGet Our Newsletter
Cheers to the Dads! Personalize a bottle of his favorite whiskey to create a modern gift for the modern man. Use code: FATHERSDAY20 for $20 off your next order of $100 or more at ReserveBar