Editor’s Note: This whiskey was provided to us as a review sample by Twin Spirits. This in no way, per our editorial policies, influenced the final outcome of this review.

Annie Lennox with Aretha Franklin singing “Sisters are Doin’ it for Themselves” pops into my head when talking about Twin Spirits Distillery in Minnesota. It’s one of the first one-woman owned distilleries, and Michelle Winchester has been busy making gin, vodka, and moonshine. Most recently Twin Spirits Distillery has released M Rum and M Whiskey.

Twin Spirits Distillery is still pretty new; what started as a project in 2014 when Winchester turned 50 took about two years to get both the distillery and a cocktail room up and running. As the business continues to grow, Winchester has employed an all female workforce. She follows her gut when it comes to distilling, and she tries to incorporate as much of Minnesota in every bottle as possible. Winchester’s story is a perfect example of how it is never too late to follow your passion or dreams.

As I mentioned before, Twin Spirits strives to make a true Minnesota product, and with the M Whiskey, they finish it in red wine barrel’s from Minnesota’s first winery, Alexis Bailly Vineyard. 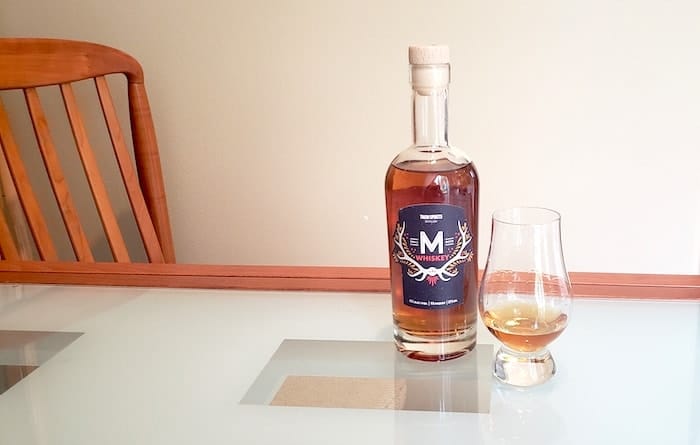 Vital Stats: 45% ABV (90 proof); mash bill made up of 95% rye and 5% malted barley; No age statement is given, but it is finished in red wine barrels from Alexis Bailly Vineyard in Minnesota; Only available in Minnesota; 375mL $17.

Nose: The first thing I unexpectedly get is a lot of pine. Also at the forefront is tart green apple and ripe pear. I get an underlying cinnamon note, as well as fresh homemade soft caramel chews that remind me of the kind you find along the coast in a candy shop.

Palate: The mouthfeel is noticeably soft and velvety. It’s warm and spicy from the rye. It tastes a bit sour similar to to the Henry McKenna Sour Mash. There’s wood with a lot of smokey vanilla. Caramel is present, but it isn’t too sweet or overpowering.

Twin Spirits M Whiskey is complex with nuances from both the nose and palate. It's lovely and amazing to see women infiltrating the whiskey world that has pretty much been a men's club for hundreds of years. I have never tasted a two grain mash bill with 95% rye that has been so enthralling. I enjoyed every sip, and think whiskey-goers will love being surprised as much as I did. I can't wait for nationwide distribution. Luckily I have friends in Minnesota who can get me some.