Irish Whiskey is one of the fastest growing spirit categories in the world and has been for several years. Jameson leads the group, but distilleries are being built, spirits are being aged and there are quality brands following the path into global popularity. Teeling Whiskey has a long family history but is recently ‘reborn.’ They’re bringing a modernistic approach to whiskey making, in which I mean they understand and are utilizing the modern market while honoring their tradition. Many brands claim this as a montage but only the best succeed in living that reality.

The review today covers what is essentially the first whiskey distilled from the Teeling Distillery, which is the first new distillery in Dublin in 125 years. Before this, anything in a Teeling bottle was made at the Cooley Distillery, which was founded by John Teeling and now owned by Beam Suntory. The ‘reborn’ Teeling brand was founded in 2012, and has been known in recent years for both more run of the mill bottlings and also some super old expressions, including a highly coveted 34 year old Irish whiskey.

The Teeling Single Pot Still Whiskey is a ‘traditional’ mash bill of 50% unmalted spring barley and 50% malted barley. It is triple distilled through copper stills ranging from 9,000L to 15,000L. By using a combination of virgin oak, ex-wine and ex-bourbon barrels they’re creating what is an incredibly unique Irish spirit. Alex Chasko, the master distiller, is a native of Portland Oregon (where the Whiskey Wash calls home) and joined the Teeling team in 2015 after working at the Cooley distillery as an innovations manager. 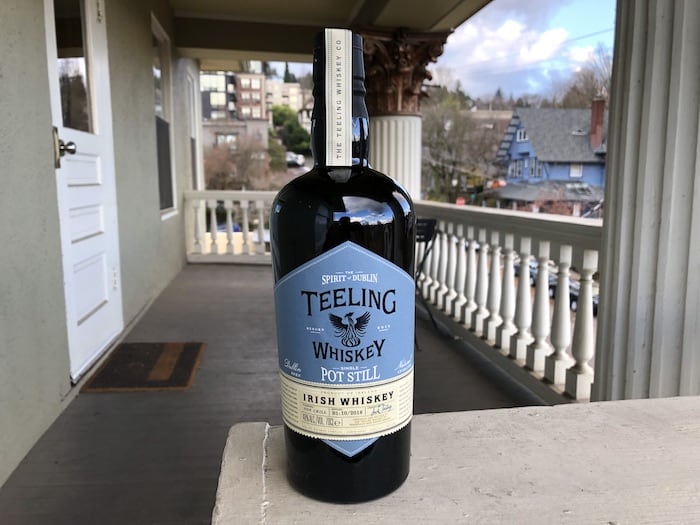 Appearance: Very light golden straw. The bottle has a beautiful blue background, a rare color profile for the whiskey world.

Palate: The alcohol content is extremely palatable and smooth, a familiar mark for Irish Whiskies. An incredibility unique Irish spirit, and strikingly different from other Teeling bottles. A stimulating quality exists not unlike high acid in a wine, while flaky pie crust and white peaches appear. A bit of pepper and brown butter lead into almonds and a dry but pleasant finish.

This is likely going to be a surprising bottle for many due to the mash bill and cask selection. I think it is extremely interesting, innovative and well crafted for being a young triple distilled spirit. While I have to admit I don't love the flavor profile, this whiskey has all the characteristics of quality at the price point. The years of experience that has led up to this release is shown, and I think they got it right. Drinking the Teeling Single Pot Still Whiskey is a unique experience and one that you may or may not love, but it will definitely make your taste buds ponder!