Tamdhu comes from a Gaelic word that means dark little hill – fitting because the distillery is built along banks of the river Spey, Scotland in a beautiful shady grove. In 1897, the distillery was touted as one of the most modern distilleries of the age by reporters of the time. Many changes of hands ensued over the years, and most recently the distillery closed its doors in 2010 and remained closed until 2012. Independent family distillery Ian Macleod Distillers took over the brand, and the company now focuses on producing single-malt varieties.

Tamdhu was one of the last distilleries to malt all of its own barley in-house using Saladin boxes. The boxes are a French invention that mechanically turned the grain instead of having to use manual labor, and they allowed for Tamdhu to triple their output in a very short amount of time. The box itself is made of concrete with a perforated bottom. After steeping, the barley is poured into the box and air is blown through the perforations to control the temperature. After heating for 24 hours, mechanical sifting takes place, pulling the barley from the bottom of the box to the top. The grains get sifted every eight or so hours for four days until they are ready for drying. 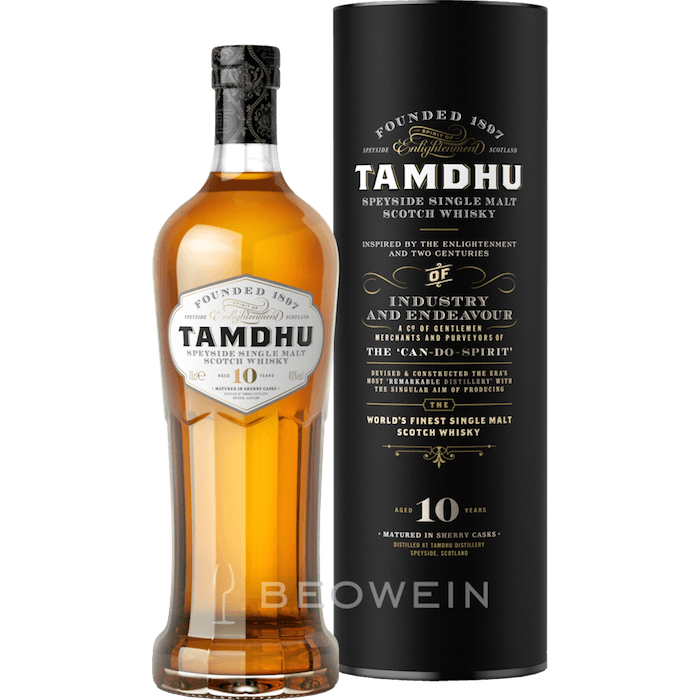 Vital Stats: Aged ten years in sherry casks, 86 proof and 43% abv. From the Speyside region of Scotland. The mash bill is 100% malted barley. Each bottle retails for around $40.

Appearance: Wild and golden, with legs that form oily little droplets on the side of my glass.

Palate: This 10 year aged scotch has a very light body. I’m first hit with charcoal, and a subtle spicy grain, followed by dark fruit and grape. Very tart and fruity on finish. It’s very grainy and sweet like a fig newton, with a slight vanilla sweetness on the front. The spirit sits slightly oily on the palate, and sticks to the throat a bit. Toasted almond notes dance through the middle of this whisky symphony. The finish lasted around five minutes, with nuts and dark fruit flavors lingering the longest.

Tamdhu 10 year aged is a solid example of a single-malt scotch. Admittedly, I am not well-versed in the language of Scotch, but I really enjoyed dipping my toes into this complex genre of whisky. I liked the light, but complex flavor of Tamdhu 10 year, and I think this is a good starter whiskey for those who doesn't know a lot about Scotch. However, I think it's also good enough for those who consider themselves Scotch experts.