Whiskey Review Round Up: Oppidan Spirits

Everyone is always talking about how much the craft whiskey industry is growing. It’s a nice, easy and sort of vague thing to say, but I didn’t really realize how seriously quickly new distilleries are popping up all over the place. In 2004, there was just 60 craft distilleries in the United States. In 2017, there were 1,300 operating and producing new expressions every year. It’s no wonder that craft distilleries are innovating in unique ways, vying for a place on shelves in bars and liquor stores.

Founded by Jeff Walsh in 2015, Oppidan Spirits calls itself the “new american school of distilling”, taking traditional distilling techniques and combining them with modern or experimental ways of distilling. Their attitude is one of controlled experimentation or innovating within boundaries. They’re especially known for their Solera Aged Bourbon, which they used to create a younger, more complex bourbon that still tastes great.

Now, they’ve got a whole line of experimental spirits that are pushing the boundaries of what we think whiskey is supposed to be. The fact that most of the whiskies are fairly young, using creative techniques and still taste really good are a testament to Oppidan’s potential to quickly become a force in the craft whiskey world. 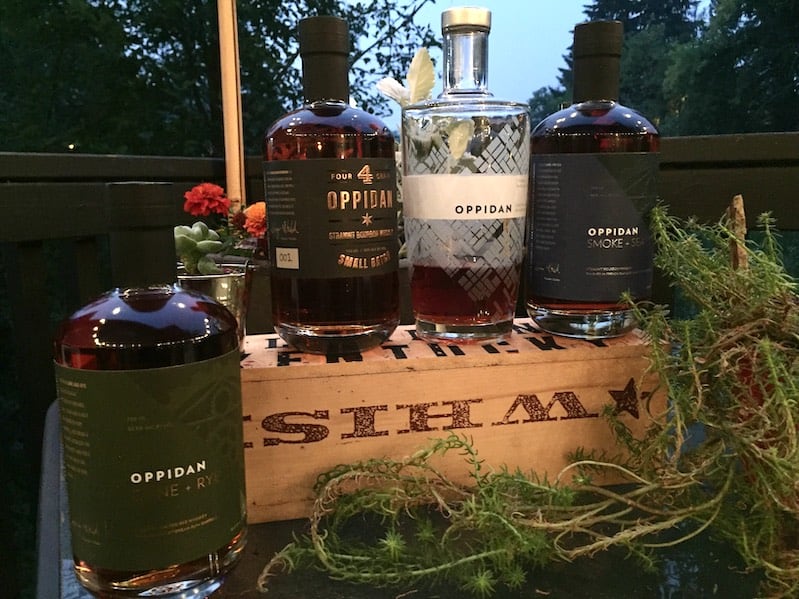 Nose: Smells like fresh, wheat bread, yuzu and light vanilla sweetness. The fragrance is sexy, light and rich at the same time.

Palate: Sweet vanilla walks us into a sizzling sensation filled with cinnamon and pepper. The mouthfeel is super smooth and creamy, and coats the tongue without feeling sticky. Notes of clove and lemon peel provide a balance to the spice from the rye. There’s a lingering aftertaste, a hint of vanilla and cinnamon like a good horchata, lasting for quite a while.

Vital Stats:  Oppidian’s founder Jeff Walsh says that solera style is not very commonly used to age whiskey. Oppidan’s most well-known expression is aged in the solera style, meaning the barrels used for aging are never truly emptied, so that each batch is a continuation of the last, with the average age of the liquid increasing over time, creating cohesion between batches.

Nose: The smell is sweet, like a dessert wine. Chocolate covered cherries and butterscotch candies stand out, and the undertones of sweet bread and figs are allowed to shine through.

Palate: Rich, dark chocolate cherry sweetness leads into bitter dark-roasted coffee notes. It could truly be a substitute for dessert, paired well with a scoop of vanilla bean ice cream. There’s nothing savory about any part of this whiskey, and at times, I wish there was more going on than just straight sweetness. There’s not quite enough of a balance from rich espresso and dark fruit.

Vital Stats: This version takes both of the above whiskies, Four-Grain Bourbon and Solera, blends them, and finishes them in French Oak and peated Islay Scotch barrels. Smoke + Sea is 46% ABV, and retails for $60 per bottle.

Appearance: It’s a similar color to the aforementioned whiskies, with similar viscosity and legs. Dark amber, with hints of gold and rich red.

Nose: It smells like shortbread, with notes of charred peat and smoke drifting through the sweetness. The French Oak acts as a backbone, holding up all the nuances within the spirit, including toffee, freshly cut grass and lemon peel.

Palate: Leading in with a silky bourbon flavor, the beginning tastes like cornbread, figs, toffee and vanilla. There is a tingling sensation accompanied by a black peppery rye flavor leading into the finish. Ending with heavy, peat smoke the finish is more like a scotch that’s been blended with bourbon. There’s a certain saltiness that combines with the sweet flavor that actually does taste a little bit like the ocean.

Overall, it’s very well balanced and the flavors used make sense together. The sweetness and bourbon flavors combined with the heavy smokey flavor provide a great harmony of flavors.

Vital Stats: Cane + Rye is a result of taking Oppidan’s Malted Rye whiskey, and aging it for a year and a half in Caribbean rum barrels. The whiskey is 50.5% ABV, and retails for around $60 per bottle. The mash bill just consists of 100% rye malt.

Appearance: Legs are a bit stickier on this one, maybe because of the sugar used in making rum. The color is still around the same dark amber, reddish color that all the other whiskies seems to have.

Nose: It’s very rum-heavy on the nose. Cane sugar, bananas, coconut and other tropical fruit stand out, with undertones of black pepper and hints of earth and grass.

Palate: Rye is the star of the show on the palate. Mellow rye spice, tobacco, leather and vanilla from the malted rye whiskey on the front end show off the earthiness and spice. On the finish, slow sweetness, bananas, coffee and honey provide a balance to the more savory rye influences. The result is a whiskey that is sweet, spicy, savory and sweet.