Editor’s Note: These whiskeys were provided to us as review samples by Infuse Spirits. This in no way, per our editorial policies, influenced the final outcome of this review.

For a long time, people have taken vodka, rough distillates or whatever form of alcohol they could get their hands on, and infused it with something tasty. Gin is an evolved version of this concept, where the distillate is passed through an infusion basket before being condensed. Bartenders have been playing with infusions for cocktails for years. The concept isn’t new, but Infuse Spirits has marketed it and made it their passion.

Infuse Spirits is located in Las Vegas. They were founded in 2012 by then 25-year-old Seth Benhaim. Much of their line features vodkas with bottle infusions, meaning they put an infusing fruit or spice into a bottle, and seal it. When you buy it from the liquor store, the fruit is still there and the flavor is likely intense and as fresh as it could be. Part of me wonders how they control the consistency of infusion as the time between bottling and drinking likely varies greatly, but maybe that isn’t something they’re worried about. Nonetheless, they do hold a niche spot in the market.

Luckily, their whiskies are a little different, but go by a similar strategy. Featuring a rye and a bourbon, along with a cask strength version of the bourbon, they take lightly aged Kentucky distilled whiskey and infuse it with so called “broken barrels.” After about six months of barrel aging, they place the spirit in steel tanks and add wood chips taken from specific types of barrels. If those chips were left in the bottle on the shelves, the whiskey would taste like a tree. So, they filter it out before bottling.

By using a combination of traditional aging and chipping, they are able to reach a relatively mature whiskey with an added punch of flavor. They are interestingly enough using three types of ‘broken staves’ for this process: French oak, ex-bourbon, and ex-Oloroso sherry. This brings a fun complexity to the whiskey, at the very least making them interesting, and actually pretty tasty! Let’s dive in. 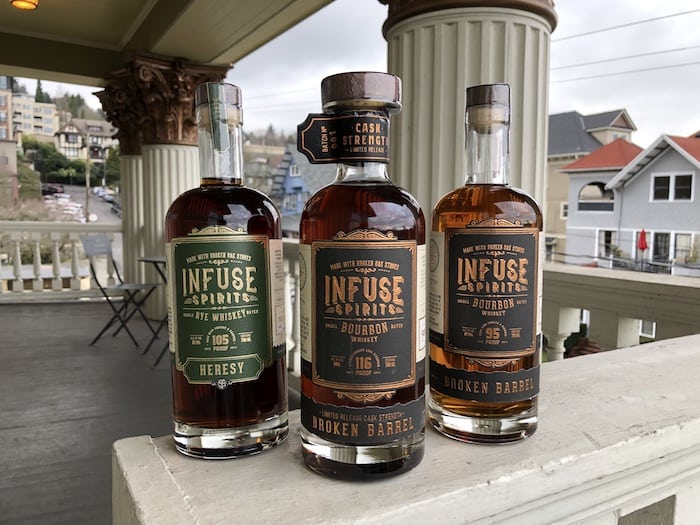 Palate: Initially there is caramel and oak, followed by vanilla, raspberries and honey, finishing with grain. A creamy silkiness is carried by wood tannins.

Final Thoughts: Nice complexity in flavor and taste. There is an inherent youngness present that you can notice through a lack in continuity of flavor structure. One flavor begins and ends, until you reach the next. This is common in younger whiskey and is something only time can develop. For the price, I think it is a very fun and tasty whiskey.

Palate: Grain forward with dark chocolate and corn oil. Notes from the nose actually carry through nicely, such as the cashew and raspberry. Viscous and powerful, extremely tannic (almost obnoxiously so). Packs a punch.

Final Thoughts: Even more fun than the bourbon, it is still slightly undeveloped. I think these are great whiskies for those a bit newer to the whiskey world because they bring great flavors forward in a discoverable way. This one has big structure, and would be fantastic for spirit forward cocktails. Once again, a good score because it is reasonably priced for cask strength and has only minor flaws.

Final Thoughts: The style is consistent with all three bottles, which I appreciate. This one has a texture I have never experienced, and it leads me to question what’s going on. The sherry cask infusion is most prevalent to me of the three. This is a nice after dinner rye to drink on the rocks, but is a bit far from what one might expect.