Editor’s Note: These whiskies were provided to us as review samples by Coppercraft Distillery. This in no way, per our editorial policies, influenced the final outcome of this review.

Coppercraft Distillery wants you to think about western Michigan when you think about liquor. According to them, they aim to “produce the finest blended American craft whiskeys.” They also produce gin, vodka, and rum, in addition to rye and bourbon. It’s very ambitious for a distillery that was founded in 2012, and was purchased by the DeVos family in 2016.

Coppercraft is somewhere along the timeline of eventually having much more of their own juice in bottle we would assume, but in the meantime, while their own stock ages, they are likely sourcing a good amount of their bottled whiskey; our guess is MGP. So far they’ve had some successes, including winning Michigan distillery of the year in 2018.

Furthermore, last year they revamped their bottles to feature a “proudly crafted in Holland, Michigan” seal. And yes, the bottles look cool, and I really have to say their logos and merchandise just look pretty sweet as well. If I visited their establishment, I could totally see myself buying some of it, with or without the influence of alcohol.

So we’ve got the Midwest pride, the financial backing, and the plethora of bottles. For this article, we rounded up three of Coppercraft’s whiskeys: the Straight Rye Whiskey, Straight Bourbon, and Blend of Straight Bourbon Whiskies. 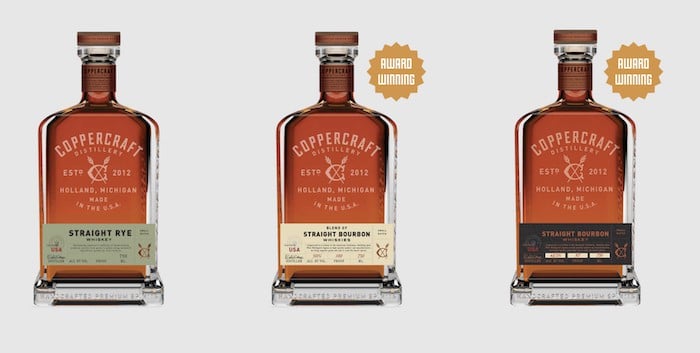 Vital stats: This was re-released in July 2018, after a two-year hiatus. 95 percent rye and 5 percent barley (noted as being a blend of MGP and in-house whiskey). 90 proof. About $43. Produced in Holland, Michigan.

Nose: Apples and apple cider. But also, this this smells a little industrial, like a paper plant or some product of manufacturing. Or glue—Elmer’s white glue. That sounds worse than it is—it’s not off-putting, but it was unusual: I haven’t smelled that in a rye before.

Palate: I like the flavor of this. It’s nothing like the nose. There’s no industrial byproduct on the palate (whew). There’s that chewy rye quality I like, and a brightness to it. It’s not hot at all, even at 90 proof. No heaviness.

Palate: This…is not as smooth as the rye. It burns. It’s sharp. It tastes like drinking too-hot hot chocolate and burning your tongue rendering it unable to taste the rest of what you eat for the rest of the evening.

Vital stats: Undisclosed mashbill but likely MGP-sourced; a blend of four and 10-year bourbons; 100 proof; about $43.

Appearance: A little drab, actually. It’s kind of a flat light brown. Companion said, “It’s the opposite of vibrant.”

Palate: Ginger ale, not spicy. And yet, by far the most flavorful of the three. There’s more richness than in the other bourbon; maybe it’s the blend of young and old that gives it more depth. This could work in an old fashioned if you like them a little on the sweeter side.