Editor’s Note: These whiskeys were provided to us as review samples by Bushmills. This in no way, per our editorial policies, influenced the final outcome of this review.

Bushmills, the venerable Irish whiskey maker, is the second largest and the oldest Irish whiskey producer.  Founded in 1608, they lay claim to being the oldest whiskey distillery in the world. Throughout their 400 year history, the Old Bushmills Distillery has continued to use only 100 percent malted barley, triple distilled in copper pot stills.  Located in Northern Ireland, it has always played second fiddle to Jameson in terms of volume, though the United States has been a significant market for some time.

Bushmills’ whiskey, up until the 1980s, had largely been sold as blends, with Bushmills Original being the most common. More recently, the distillery relaunched its much lauded 16 and 21 year single malt expressions. Following the ascent of bourbon in the global whiskey market, Bushmills has released blends focused on appealing to bourbon consumers with the release of both the Red Bush and Black Bush, both more weighty and barrel driven than the Original.

The six whiskies reviewed today fall into two camps: blends and single malts.  The Original, Red Bush and Black Bush blends are all bottled between four and eight years of age, with varying casking programs and malt to grain whiskey percentages. Bushmill’s Original is a classic, light bodied Irish blend. Red Bush is aged for four years exclusively in freshly dumped bourbon barrels.  Black Bush contains a significantly higher percentage of single malt, around 80 percent, and is finished in both bourbon and Oloroso sherry casks.

The newer single malt releases are age stated at 10, 16 and 21 years and see a variety of aging regimes and finishes.  There is a 12 year release that is distillery only and was not provided for this review.  The 10 year, aged in bourbon and sherry casks, is the youngest and lightest of the single malts.  The 16 year is aged in oloroso casks, ex bourbon barrels and finished in port wine pipes. It was named “Irish Single Malt of the Year” in 2018 by the Jim Murray Whiskey Bible.  The 21 year expression is aged for 19 years in ex bourbon and oloroso casks followed by a two year Madeira cask finish.  It too was awarded “Irish Single Malt of the Year” in both 2013 and 2014. 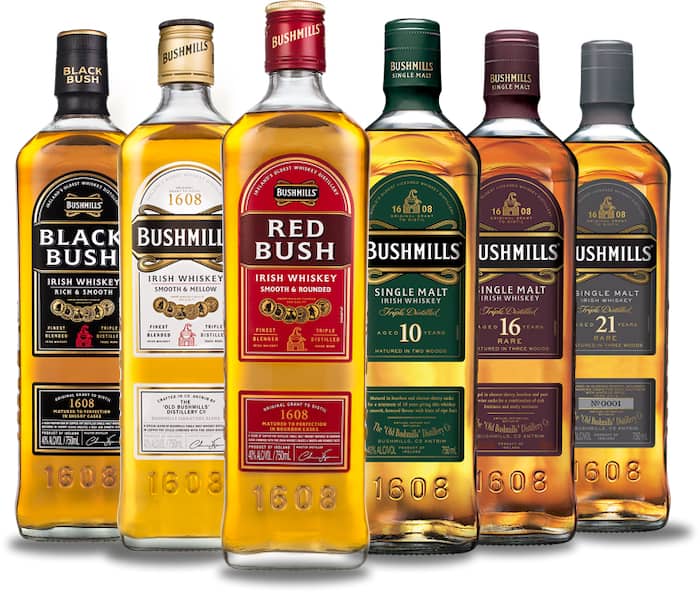 The main whiskeys from Bushmills Irish Whiskey (image via Bushmills)

Nose: Quite hot, with a good bit of discernible ethanol and lots of green apple skin.

Palate: There’s pronounced alcohol burn on the tongue, with some fruitiness akin to bubblegum and tart apple.  A not entirely unpleasant raw cereal character backed up with some light vanilla and a thin body.

Final Thoughts: While it does come across as quite light and hot, especially in comparison to the other Bushmills offerings, it never veers towards the saccharine or vanilla extract qualities I’ve experienced in other entry level Irish blends.

Nose: Lots of heat on the nose with some white table grapes and a bit of Belgian candi sugar.

Final Thoughts: Despite the sharp nose I’m surprised by its mildness. While kind of bland and uninteresting, this feels like a distinct offering from Bushmills Original that will definitely please most bourbon drinkers.

Nose: The glass jumps with aromas of Riesling grapes, tropical lychee fruit and mango candy.  Quite lively and a welcome departure from the previous expressions.

Palate: The taste is all warm spices, caramelized sugar and marzipan.  It’s quite round, with a touch of tannic astringency and some nice, rich sherry character coming through.  Some raw ethanol heat but nothing terrible unpleasant and a medium length finish.  \

Final Thoughts: Bushmills Black Bush comes across as a terrific bargain.  The nose is expressive, the body deep and warming and the price very reasonable.  Bushmills Black Bush incorporates characteristics from a range of whiskey styles, to great effect. This should satisfy almost all whiskey drinkers, at a bargain price. Recommended.

Nose: The nose is light but expressive, with notes of honeydew melon, roasted barley tea and a little savory cheese rind must.  There’s a hint of alcohol burn.

Palate: The taste begins with sweet roasted grains and milk chocolate.  There’s some spice to it, notably nutmeg or mace. The body is quite thin with a slightly tannic character that’s quick to dissipate.

Final Thoughts: A fine entry into the age statement single malts produced by Bushmills. It has some of the dominant character of the older releases but with quite a bit more youthful vigor.  Bushmills describes this as a “summertime whiskey” and suggests serving it on ice or even from the freezer, to give you some idea of its body (or lack thereof).

Palate: Rich, ripe fruit such as cantaloupe and fig mix with marzipan, almond milk, and a pronounced numbing clove flavor.  The body is chewy and round with low tannins and a long, mellow finish with little to no alcohol astringency.

Final Thoughts: This is a delicious single malt.  For fans of heavier, dark fruit forward malts this is well worth a spin, especially for those who may love those characteristics in single malt Scotch but find themselves turned off by the presence of peat or the often higher alcohol content.  Highly recommended.

Nose: Beautiful and nuanced, with notes of bergamot, vanilla bean and dark chocolate.

Palate: The flavors are more soft and refined than its younger, brasher sibling. Ripe green melon, toasted oak, papaya and an almost cheese like salinity and richness make this a beguiling dram.  The body is round and chewy, though with quite a bit more tannic structure and some prickly alcohol burn. It comes across as a distinctly “mature” whiskey.

Final Thoughts: A beautifully delicate single malt.  Fully matured, it is beginning to show quite a bit of tannic oak character, though it’s not over the hill yet.  It conveys more elegance and nuance than its younger sibling at the slight expense of the dark, fruit forward power of the 16 year.

This is a unique Irish single malt that may be more in line with more traditional expressions, maintaining its lighter character and fruitiness well into its old age.