Also, we incorrectly implied Tommy Klus was still associated with the Multnomah Whiskey Library. He has not been with them in some time – The Whiskey Wash regrets the error and has removed this reference to the Library from the article pending further review.

Sheridan, Oregon’s Ransom Wines & Spirits represents all we love about small wineries and innovative micro-distilleries without any of the marketing song and dance or hipster vanity. Tad Seestedt dumped his last dime—and a lot of dimes he didn’t yet have—into making grappa and brandy back in 1997, then added wine to the production list in 1999, and by 2007 was taking on grain-based spirits. He scraped by until he was finally able to buy his own 40 acres in 2008 for growing barley and grapes (certified organic since 2011), where he prioritizes sustainability.

These days, Ransom is probably best known for their pinots and Old Tom Gin, but we were impressed with their WhipperSnapper Oregon Spirit Whiskey, and their version of a retro Irish whiskey—The Emerald 1865—is, frankly, brilliant. Food Republic pondered recently whether this was the “most authentic Irish whiskey made in America?” and I can’t disagree. Nor could the San Francisco Spirits Competition judges, who awarded it double gold in 2014. 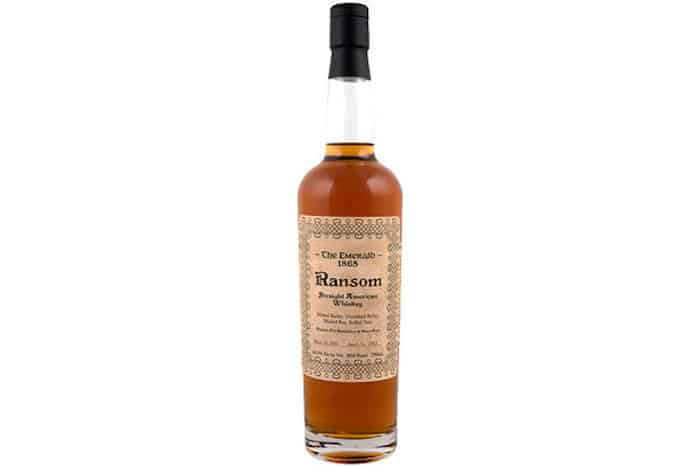 As with their Old Tom Gin, Ransom developed The Emerald 1865 in collaboration with cocktail historian David Wondrich, whose research supplied a mash bill dating back to 1865: malted two-row barley (including a percentage of crystal malt), unmalted six- row barley, rye and oats. (You can learn more about the technical details in Ransom’s refreshingly factual and informative literature here, but if the mash bill alone isn’t enough to make your mouth water, you might be reading the wrong website.) Grains that aren’t grown at the Ransom farm are sourced, usually locally from organic farms, and the product is mashed, fermented, distilled, and bottled on site.

It’s not very much like the Irish whiskey to which we’re accustomed, nor does it rely on nostalgia to sell bottles to guys wearing Atari t-shirts. The revival of an historic recipe is interesting, but not worth much if it turns out there’s a good reason no one uses that mash bill anymore. Thankfully, the result is a complex flavor that provides a welcome alternative to the typical Irish whiskey standard-bearers.

Nose: I notice two distinct categories of aroma, both quite inviting: a malty, grassy fragrance and sweet, spoiled fruit (apple and plum). There’s a compelling contrast between the fresh grassy scents and the smell of fruit turning to puddles in the crisper.

Palate: Opens sweetly, but only for a moment. Then it’s almost mushroomy—remarkably earthy and herbaceous. There’s a very faint hint of smoke and wine cask dregs. The long finish is spicy and mildly bitter. The alcohol heat weaves itself into my sip as an integrated part of the flavor, rather than a distraction. It reminds me of a Belgian beer-washed cheese that is both bold and intricate—coyly offering an array of flavors, some more appealing than others, in quick succession.

The Emerald 1865 is unique and delicious—two terms that more or less describe everything I hope to find in an unfamiliar glass of whiskey. Have I now experienced the Irish whiskey of yesteryear? No clue—after all, none of us know what the hell Irish whiskey circa 1865 tasted like. In any case, I’m quite certain I’ve just tasted a well-conceived and well-executed spirit from a source that proves how valuable a determined, innovative, and genuinely passionate micro-distillery can be.

Mark is a poet, writer, editor, and cheese monger. He’s also a real trip on karaoke nights. After leaving a career as an English professor, he started a small business at ParagraphDoctor.com and moved to Portland. Now he’s all about birds, bourbon, and breweries. His ridiculous birding blog can be...