While it’s quite common for American whiskey brands to tie their modern products to a vaguely pre-Prohibition incarnation, New York Distilling Company gets a little more specific with their Ragtime Rye.

While neither Ragtime Rye’s online description nor label specifically state the distillery is emulating some flavor or recipe from an earlier time, they certainly pay homage to the spirit and music they say would have been “stalwarts of saloons and brothels alike” during the ragtime era.

For the record, the era is a relatively small one with regards to the genre of ragtime, a distinctively American style of syncopated music that arose in the 1890s – particularly among black pianists – and blew up in the 1900s before being eclipsed by jazz and basically forgotten by 1920, according to the U.S. Library of Congress.

Similarly, New York Distilling Company notes that the popularity of rye “has waxed and waned like amber waves of grain” – yeah, they went there – and has only recently experienced a revival.

Whether Ragtime Rye is close to what one might have sipped while listening to a phenom tickle the ivories in the early 1900s, we’re not sure. What we do know is that it’s a straight rye with a mash bill we previously reported as 72 percent rye, 16 percent corn, and 12 percent malted barley, using ingredients grown in the state of New York.

When released in 2015, Ragtime Rye reportedly ingredients were entirely non-GMO and primarily organic, though the bottle makes no mention of that. The bottle does state, though, that the whiskey is aged for at least three years in solely full-sized barrels – specifically oak as the term “straight” implies – at bottled at 45.2 percent alcohol by volume.

To be clear, I’m sampling an old bottle, which is important as it appears New York Distilling Company took the advisable step of up-scaling their brand and bottles. 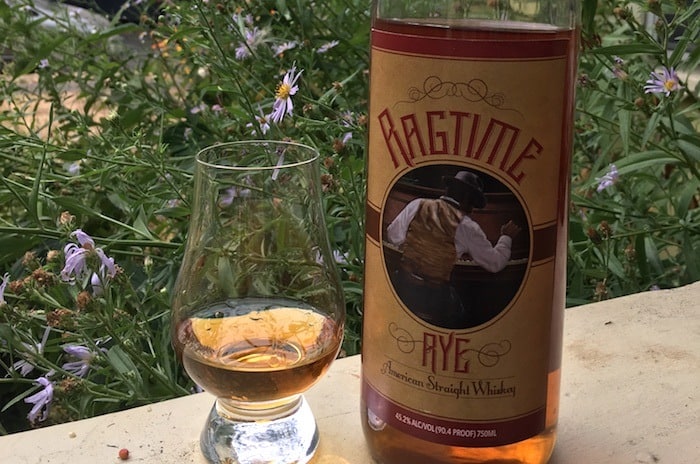 Vital stats: American straight rye with a mash bill of 72 percent rye, 16 percent corn, and 12 percent malted barley, aged at least three years in full-sized oak barrels and bottled at 90.4 proof. Sold in 750-milliliter bottles for about $45 a piece.

Appearance: Amber with a reddish hue and slightly darker than the typical whiskey.

Nose: The initial sniff brings a strong wave of sweet, tropical vanilla, with notes of oak, sandalwood, salt, citrus, and a slight but nonetheless unfortunate touch of rubbing alcohol. That quickly tones down into a mellower, earthier caramel with a scent of apple giving it a bit of a tart flavor with a faint touch of allspice.

Palate: This falls on the tongue like just plain honey. I often use that description to describe the first sip, but usually it comes with hints of other flavors that tend to entice me – this just tastes and feels like watered down honey. That flavor mostly sits languidly on the tongue as spicy notes of cloves, pepper and cinnamon very gradually manifest themselves. As those spices slowly build up, swallowing sends and abrupt wave of them mildly moving through the back of the mouth, upper throat and slightly into the back nasal passages. That tingling seems to work its way through the mouth with a spice combination that seemed off – like baking spices with an odd touch of Italian seasoning – and a bit of smoke. That spiciness flares up for a few minutes and gradually fades back to a sweet honey that sticks in the mouth for a bit.

On paper, Ragtime Rye has everything I would want in a whiskey: it starts out sweet with an evolving tide of spice that flows in with vigor before ebbing back to a sweet flavor. However, this whiskey lacks the complexity that would actually make that pattern interesting for the palate and instead moves from bland sweetness, to somehow both underwhelming and overwhelming spice, and back to bland sweetness. While Ragtime Rye isn’t unpalatable, it’s also not memorable. I recommend it as an unostentatious cocktail ingredient.