Editor’s Note: This whiskey was provided to us as a review sample by Ogden’s Own Distillery. This in no way, per our editorial policies, influenced the final outcome of this review. It should also be noted that by clicking the buy link towards the bottom of this review our site receives a small referral payment which helps to support, but not influence, our editorial and other costs.

Porter’s Whiskeys appear to be targeted to people who don’t enjoy whiskey but who enjoy flavors other than whiskey in their whiskey. According to their website, one of their creations “combine the smoothness of Canadian whiskey with the most divine ingredients to deliver you one hell of a well-balanced flavor. Sweet, but not sugary, berry and spicy, but not too hot, Porter’s Fire captures the passion of its namesake and the carefree spirit of the Old West.” Other Porter’s flavors include peach, apple, and huckleberry.

The label on Porter’s features an intense, terrifying man, just daring you to sample the whiskey and reveal what you actually think of it. The fellow depicted is Orrin Porter Rockwell, who served as a bodyguard of Joseph Smith and Brigham Young. If I were to go solely by his severe stare, I’m guessing he did a bang-up job.

Last year, we reviewed a non-flavored whiskey of Porter’s—their small-batch rye, which is sourced from MGP but then aged and blended in Ogden, Utah–and gave it a decent rating. According to our review, this product was released in response to customers asking, “When will you make a non-flavored whiskey?’

Porter’s Whiskeys are part of Ogden’s Own, an independently owned distillery based in Ogden Utah. Bar Business Media last August wrote a detailed piece about Porter’s and highlighted the whiskey we review here: Porter’s Imitation Peanut Butter Whiskey. The article goes on to say that this whiskey is the first expression released at their brand-new distillery, opened in April 2020. It will allow for a 10-fold increase in production in to address what the article referred to as “massive regional popularity.”

Some good news about Porter’s Imitation Peanut Butter Whiskey: Those with a peanut allergy can—literally—breathe easy. Although this is a peanut butter-flavored whiskey, it’s imitation peanut butter whiskey, which means that no actual peanuts were harmed in its making, Drinkhacker reports. This flavor is proudly, unabashedly, 100% artificial. Carmel color was even added, and Drinkhacker mentions Porter’s was not shy about its inclusion.

Is this innovative and fun? Or is it taking one for the team? Let’s discover, together. 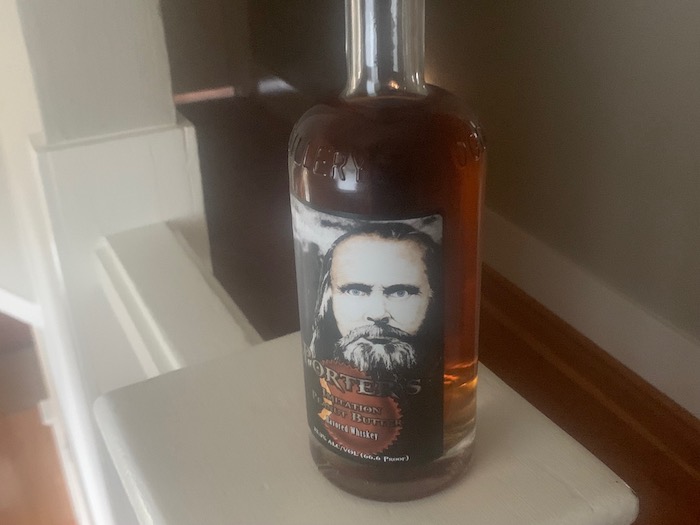 Nose: This is stronnngggggg! In the sliver of time between the moment I uncorked that bottle, poured out a sample, and quickly slammed the cork back in, the whiskey managed to fill the room with the scent of fake flavors. It does not smell like peanut butter. It does not smell like chocolate. It smells like sticking your nose into a child’s plastic pumpkin after they return from trick-or-treating.

Palate: What did you expect?  I’m sorry to share the obvious: It tastes terrible. This tastes like cough medicine for children, and not even in a peanut butter and chocolate flavor. More like peanut butter and jelly. And I loathe PB&J. I always have. Everything about it is gross: the smell, the taste, the jelly seeping through white bread turned translucent with jelly leakage.

This whiskey is the equivalent of a sodden PB&J that’s sat in your locker too long or maybe had unsupervised time with the class bully before he returned it to you.

For the good of the order, I really do try and not slam whiskies I sample because there is good in everything, and I admire that Ogden’s Own is doing what they are doing and their ambitious plans. Obviously, there’s a market for flavored whiskies. I bet others who like those types of beverages will like this. I’ll also give the company major credit for making hand sanitizer and getting it all out there at the beginning of the COVID-19 pandemic. And at least this bottle of whiskey was not accompanied by a useless, environmentally unsound, shipping-container-sized press kit.

But to say I was underwhelmed by this whiskey is a massive understatement.

This whiskey puts the “no” in “Tasting Notes.”