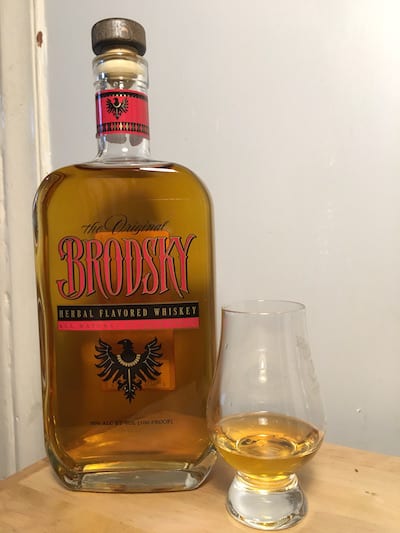 The practice of adding flavors to whiskey (or any other kind of alcoholic beverage, for that matter) has always given me pause. Although I’m rarely so rigid, with spirits, I’m skeptical about adding a new flavor element to a process that already has a wide variety ways to innovate and develop interesting flavors.

The Original Brodsky Herbal Flavored Whiskey gives me some hope that it’s possible to add flavor to whiskey without cheapening or masking its natural character – hope but not satisfaction.

Brodsky Herbal Flavored Whiskey is a 100-proof spirit that is infused with eight unspecified botanicals between distillation and aging, according to Brodsky’s official Facebook page. The bottle states that Brodsky is made by Westford Hill Distillers of Ashford, Connecticut.

Brodksy is made of a base of corn and malted barley that results in a white spirit, which is then “cold infused with 8 botanicals” for a week. It is then aged in bourbon oak barrels for 18 months and bottled at barrel-proof, uncut and unfiltered in order “to preserve the natural rustic qualities.”

The final product comes in an unassuming, 750-milliliter bottle emblazoned with a black eagle that suggests some sort of German roots or inspiration, but neither the bottle nor the Facebook page explain the symbol’s meaning.

Vital Stats: 100-proof, made with corn and malted barley, infused with eight botanicals for a week and aged in bourbon oak barrels for 18 months, then bottled at barrel proof. At least $40 per 750-milliliter bottle.

Appearance: In the glass, the whiskey takes on a typical polished gold color, but holding it up to the light reveals bits of sediment floating throughout the glass. Giving the bottle a slight shake will stir sediment at the bottom to form into a thin mist with twirling ribbons of particles.

Nose: The first whiff is dominated by lemongrass, taking on the aroma of very sweet, citrus herbal tea with a touch of vanilla. Over time, that citrusy sweetness is somewhat balanced by spicy notes of coriander, sage, black pepper and cloves, which form into an aroma that strikingly resembles Dr. Pepper.

Palate: While initially hitting the tongue with the texture and sweetness of simple syrup, the spicy flavors that were muted in the nose quickly take control. Those spicy flavors start out as a pleasant balance of the aforementioned spices. That balance swiftly turns to a wave of cinnamon, black pepper, and a touch of citrus zest, with the flavor intensity of Fireball Cinnamon Whisky.

Swallowing leaves the mouth tingling, but more from the spicy flavor and not with the alcoholic tingles I’d expect from a 100-proof whiskey.

If you’d like a conventional whiskey with a complex yet subtle blend of flavors to sip neat or even on the rocks, this is probably not the spirit you’re looking for.  While it certainly has far more complexity than your garden-variety cinnamon schnapps or other flavored spirits, The Original Brodksy Herbal Flavored Whiskey’s brashly sweet and spicy flavors make it better suited as a unique cocktail ingredient or an adventurous shot rather than a sipper to contemplate.

Final Score: 72/100 [SHOP FOR A BOTTLE OF THE ORIGINAL BRODSKY HERBAL FLAVORED WHISKEY]