For whiskey fans, bottled-in-bond usually means two things: Good quality standards, and low prices. The new Old Fitzgerald Bottled-in-Bond from Heaven Hill puts its thumb on one side of that equation—the quality side—at the expense of the other.

The Old Fitzgerald brand has a long, rich history, first making an appearance in 1870. It was later acquired by Pappy Van Winkle, who started including wheat in the recipe, and it was produced at the Stitzel-Weller Distillery until that closed in 1992. Today it’s made by Heaven Hill, and until this ultra-fancy BiB release, it was best known as an affordable, low-budget wheated bourbon ideal for cocktails.

With a suggested retail price of $110, Old Fitzgerald’s new limited-edition Bottled-in-Bond series is not the kind of whiskey you want to be splashing about into your cocktails. Everything about this release says “fancy,” down to the snazzy new packaging inspired by a 1950s-era decanter. While the bottled-in-bond regulations stipulate whiskey must be aged at least four years, this version far exceeds the minimum with its 11-year age statement.

According to Heaven Hill, Old Fitzgerald Bottled-in-Bond will be a recurring special release, with green labels on spring editions and black labels on fall editions. The age will change with each release, but every bottle will carry an age statement, and the tax strip will contain production and bottling dates. 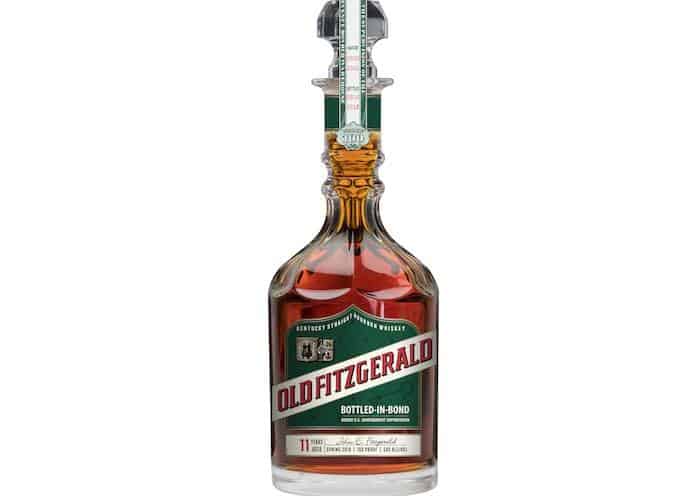 Palate: Spicy throughout, with lots of fresh cracked black pepper, dried dill, resinous oak, and banana nut bread. The long, tingly finish delivers another heavy dose of spice with cinnamon, black pepper, and cloves, lingering on the palate without wearing out its welcome. Like the nose, the palate is dense and concentrated, and while the oak character is strong it’s not overly tannic and still has a nice glossy quality.

I think this is very tasty, bottled at exactly the right proof, and extremely enjoyable. If you can find this at MSRP in your market, it’s a nice low-budget alternative to one of the Antique Collection whiskeys ("low budget" being relative, of course).