Editor’s Note: This whiskey was provided to us as a review sample by Milam & Greene. This in no way, per our editorial policies, influenced the final outcome of this review. It should also be noted that by clicking the buy link towards the bottom of this review our site receives a small referral payment which helps to support, but not influence, our editorial and other costs.

The Texas whiskey label Milam & Greene has in its stable a Single Barrel Bourbon. Never mincing words over the sourced nature of some of their whiskey components, their “Single Barrel range” is entirely out-of-house.

The release I reviewed hails from Tennessee and yielded about 280 bottles. It “demonstrate[s] elegance and personality,” according to the company. As with everything Milam & Greene does, storycraft is important here.

The twinned surnames come from founder Marsha Milam and Master Blender Heather Greene. Together with Master Distiller Marlene Holmes and Chief Brewer Jordan Osborne, they refer to themselves as a “whiskey dream team.” The core of their line are blended whiskeys: part older whiskey they purchase, part their own “characterful” distillate. That distillate could come off a pot still or a column still, as they maintain both. It does make me wonder how the character tends if it needs to be blended with finished whiskey, but I digress.

Milam’s career started in public relations and bloomed into a music production concern. Milam & Company hosts hundreds of events all over Texas, to provide “entertainment for fans and exposure for artists, and growth opportunity for sponsors.” She co-founded both the Austin Film Festival and Unplugged at the Grove, the city’s longest-running free music series. Storycraft is as important whether one’s marketing events or whiskey.

In 2015, Milam put her bourbon appreciation where her mouth was and started taking distilling classes at Koval, where she later apprenticed. June 2016 found her buying the property in Blanco, TX where the distillery sits today. She named the distillery after her distant relative, Ben Milam. The higher-end Milam & Greene label came into being once Master Blender Greene joined the team. 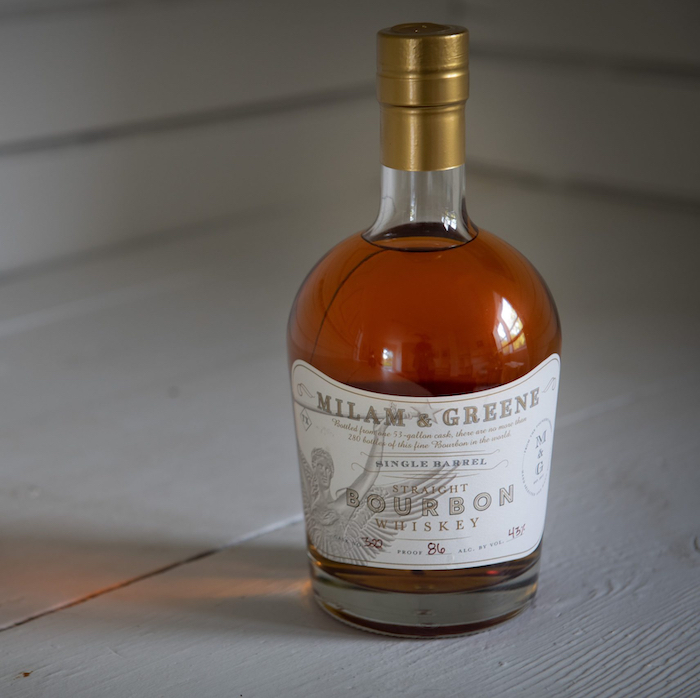 Appearance: This whiskey is a very clear, pale amber that beads and slowly forms thick tears.

Nose: The nose is cola-sweet, earthy with smoked meat and black pepper, blown roses and dark cherries filling out the edges.

Palate: Allspice on the attack brings a little bite. The mid-palate is savory, fennel and dry hay, dried orange peel; the body a bit flat. This shifts into a persistent tannic finish.

The finish makes this a bummer. After the promise of the nose, the bitterness and lack of texture are disappointing. I tasted through multiple times to make sure it wasn't a mistake. I'd love to know why this barrel was chosen for its elegance and personality. It seems to be a grump.