Named after the grandfather of one of Middle West Spirits’ co-founders, Michelone Reserve Straight Wheated Bourbon Whiskey is one of many whiskies offered by Middle West offers that include wheat.

What makes a whiskey a wheat whiskey? Instead of 51 percent corn, wheat is the predominant grain. A wheat whiskey can be anywhere from 51 percent to 100 percent wheat. That’s in contrast to a “wheated bourbon,” which just means that wheat is used in the mash bill in place of (or in higher volumes than) rye.

Perhaps the most notable wheated bourbon is Pappy Van Winkle or Maker’s Mark. Chances are you’ve heard of one or both whiskies. Most of the wheat whiskies of the world are made in the United States.

How does a wheat whiskey differ from a traditional bourbon in terms of flavor? A wheat whiskey offers more of that “bread” flavor than a typical corn-based whiskey. It may not be as sweet either, although that depends on the amount of wheat and what other grains are paired with it, as well as how it was aged. Middle West Spirits’ Straight Wheated Bourbon offers a mix of all the flavors, so it is quite big and bold. It has the sweet elements of corn, the spiciness of rye, and the richness of wheat.

Middle West Spirits seems to offer a whiskey for everyone. Whether you are looking for a white, wheat, dark rye, cream, or sherry finish. From what I’ve sampled, I’m not sure you could go wrong. 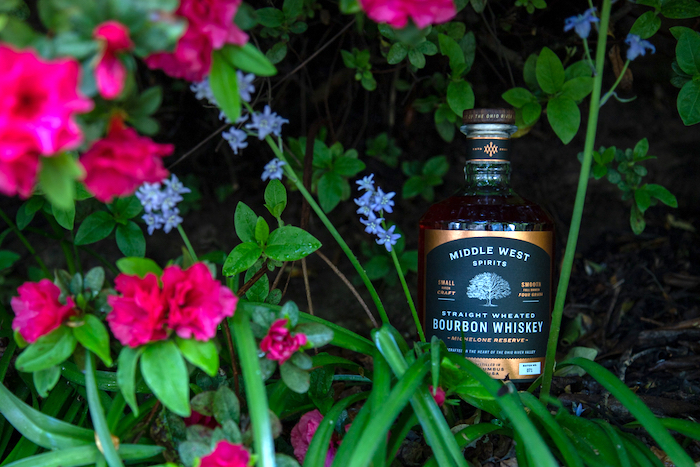 Appearance: Maple syrup in color. The wide and hefty bottle shape has a nice wood top and a surprise embellishment on the bottom.

Nose: The most notable aromas for me were stone fruit, brown sugar, maple, and ripe dates.

Palate: Upon tasting the whiskey a few times I was able to note oak, toasted walnut, vanilla, and dried apricot, with heavy floral tones like honeysuckle on the back end.

It's sweet and strong with good flavor all the way through and a beautiful maple color. It's smooth, but also has some spice, with a big and bright character. This might be my favorite of the Middle West Spirits that I've tried. I loved the fruit and floral flavors on this one as opposed to the oaky and nutty flavor of the Dark Pumpernickel Rye, or the more malty flavors of the Straight Wheat.