Editor’s Note: This whiskey was provided to us as a review sample by McMenamins. This in no way, per our editorial policies, influenced the final outcome of this review.

McMenamins is a is household name in the Pacific Northwest. Mostly unknown to the rest of the country, this family owned company runs over 55 commercial properties throughout Oregon and Washington. The company is heavily diversified, owning everything from breweries, pubs and wineries to concert venues and hotels. The vision of brothers Mike and Brian McMenamin, they also run two distilleries producing a variety of spirits. Released just this past October and made at the Cornelius Pass Roadhouse Distillery in Troutdale, Oregon, this review focuses on Billy Rye Whiskey.

The second release under the “Billy Whiskey” moniker, the first was a wheat whiskey aged in a similar style. This limited-release rye whiskey was matured four years in 53-gallon American oak barrels, doubling the age of the first Billy Whiskey. Cornelius Pass utilizes a century-old alembic still of French origin, which lends some unique spice characteristics to the whiskey not usually found in the pot and column stills that are more commonly used in the United States.

Bottled at 100 proof and being at least 4-years-old, it is interesting to note that Billy Rye is NOT a bonded whiskey. Usually when a whiskey meets both of these criteria (two of the five necessary distinctions for bonded whiskey), distilleries will often go through the bonded process to raise the whiskey’s perceived value. Regardless, with the four-year age statement proudly emblazoned on the front of the bottle, it safe to assume this whiskey holds a fair amount of flavor.

Without any further delay, let’s get to the part that includes drinking whiskey. 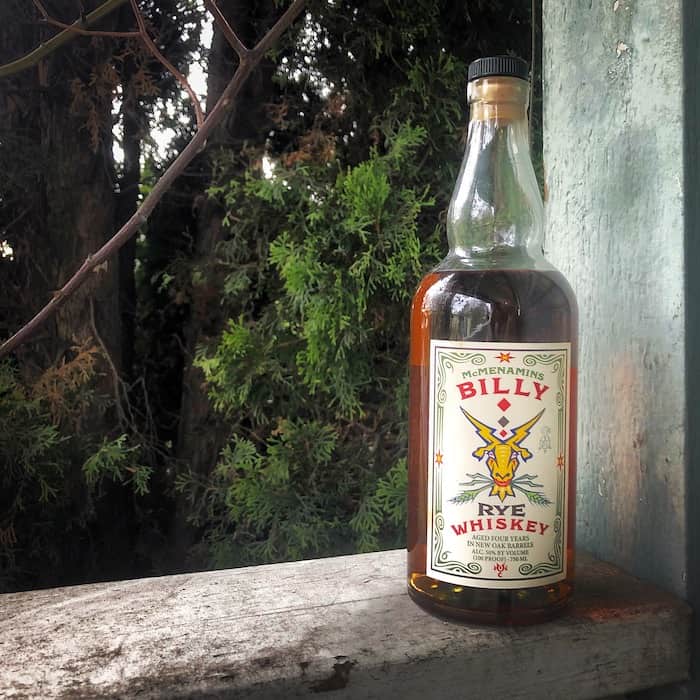 Vital Stats: Rye whiskey aged four years in 53-gallon American oak barrels. Released at 100 proof (50% abv) in 750ml bottles. Available for purchase by the glass at nearly all McMenamins establishments and can be purchased by the bottle at select McMenamins locations for $50.

Appearance: Yellowish-brown, in a sense that it reminds me of a banana desert that has a lot of caramel topping covering it.

Nose: Definitely cooked grain. The smell emanating from the glass reminds me of what it’s like to walk through a distillery during operating hours. An inherent oaky-ness is offset by a sweet, rum-like quality that contains quintessential rye spice.

Palate: Baked apples and rye spice hits quick and upfront, then fades to sweet before circling back spicy on the finish. Mouthfeel is initially viscous before falling a bit thin (in a pleasant way) after a short linger.

McMenamins is a uniquely Northwest company that has endeared itself to many people far and wide. This whiskey is ideally designed to those who love this brand, but unfortunately I find it falling a little short of the mark for what it could be.