Back in autumn of 2015, I was lucky enough to sample the Knob Creek straight rye. It was still relatively new, having launched in 2012. I’d liked it quite a bit, and it appears I’m not the only one: The high-end Beam-Suntory label has racked up quite a few accolades since its arrival, including “World’s Best Rye” at the 2016 International Wine and Spirits Competition.

As we reported back in June, Beam-Suntory was planning to release a cask-strength version of said rye. Earlier this year, Beam-Suntory rounded out its rye game with a 115 proof single-barrel version of their rye. Now they’ve added even more proof oomph; while the straight rye tops out at 100 proof, their new Knob Creek Cask Strength Rye Whiskey hits 119.6 proof.

The whiskey is nine-year-old Knob Creek Rye aged in Warehouse A— the oldest standing rackhouse at the Beam distillery. It’s already garnering awards of its own: For example, it’s already won “Best Rye Whiskey” at the 2018 San Francisco World Spirits Competition—before it was even sold, says Men’s Journal.

As Knob Creek ryes steadily raise the ante (as well as their proof), can they keep up with the quality as well? Let’s find out. 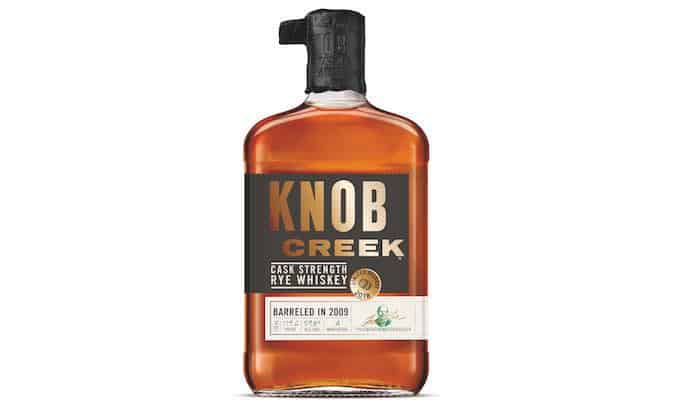 Nose: Caramel, cinnamon white pepper. Honey. Red hot candies. And above all, a high alcohol. It smells like red hots because it is hot.

Palate: The cinnamon and pepper carry through on the palate. But it’s sweet. It’s like snicker doodles. Alcoholic snicker doodles. It burns the tip of my tongue like I tasted something that was physically too hot. It’s harsh on first sip. Like a hit of burnt espresso…or a burnt joint. I like me some high-proof whiskey, for sure, but this almost seems like it’s being hot just to be hot. Like hot sauce that’s made to be hot for a stunt and not flavor.

I like my whiskey neat, but I found myself darting to the kitchen for an ice cube, if only to cool down my throat.

With a small chip of ice, the flavors immediately mellow into something much more pleasant. It’s like the flavor equivalent of aloe vera on a fresh sunburn. The ice coaxes out the natural chewiness I like in rye, and flavors like butterscotch and a hint of pine befitting the nice sipper this was likely intended to be.

Don’t leave out the ice, unless you’re into igniting your breath. If this got made into a very high-end whiskey slushie of some kind, I’d be down with that. But otherwise, it’s overwhelming. Actually, it’s the perfect summertime whiskey to be drinking during a heat wave, because it is also hot AF. You know how you’re supposed to have hot food during a heat wave? Like spicy food? This is totally the whiskey equivalent of that.