CEO of Heritage Distilling Co.Justin Stiefel distilled his first batch of whiskey when he was just seven years old. Since then, he’s gotten a degree in chemical engineering, went to law school, and opened a pretty unique distillery. Heritage offers whiskey lovers a chance to distill their own small batch of whiskey, gin, or vodka. The program is particularly cool because while it’s legal to brew beer or wine at home, it’s illegal to distill your own spirits at home.

Heritage Distilling Co. made its mark on the whiskey scene as one well awarded craft whiskey producer in North America by the American Distilling Institute, and as a majority female-owned distillery. Heritage also tends to craft its spirits entirely by hand, milling the grain, making the mash and wort on-site, and distilling in its custom stills. After opening their doors in 2012, the company’s success in Gig Harbor, Washington, has led it to open four distilleries across Washington and Oregon since then. 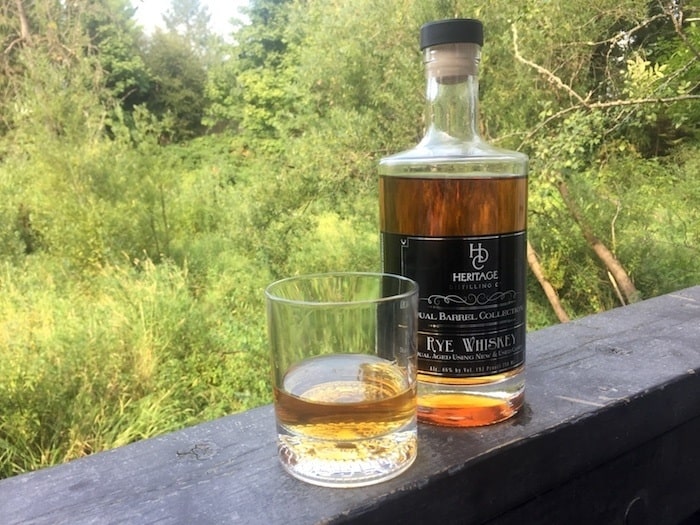 Vital Stats: The whiskey has been dual aged in new American Oak Barrels and seasoned barrels used for aging vanilla extract. The ABV sits at 45%, or 92 proof. Each 750ml bottle costs between $25 – $30. The whiskey was distilled onsite at Heritage’s distillery in Gig Harbor, Washington.

Appearance: Light golden and amber hues complement the thick legs and full body of this rye.

Nose: Charred oak and warm bread stand out at first, followed by vanilla and sweet caramel notes as the whiskey opens up. It smells almost exactly how it tastes – a little heat followed by sweetness.

Palate: A mild and pleasant rye spiciness makes up the backbone of this unique rye. It’s not as dry and robust as many other whiskies of this variety, instead showing off the sweeter side of the grain. It tastes a lot more like a bourbon than a rye on first glance. The second aging in vanilla barrels infuses a sweetness like french vanilla ice cream covered in warm caramel sauce. The sweetness can at times be overpowering, but it does find a nice balance.

Normally I like my rye whiskey on the dry, extra spicy side, but in this case, the sweet caramel and vanilla flavors and the charred oak and rye spice find a good balance where no flavor gets too lost in the mix. Black pepper rounds out the finish, adding some savory flavors to an otherwise saccharine profile.

Heritage Distilling Co.'s Dual Barrel Rye tasted a lot like bourbon, which is totally cool with me. It carried warm notes of vanilla and rye bread. Overall a really smooth and approachable rye variety. I could make a tasty mint julep with this or sip it neat.