Editor’s Note: This whiskey was provided to us as a review sample by Lux Row Distillers. This in no way, per our editorial policies, influenced the final outcome of this review. It should also be noted that by clicking the buy link towards the bottom of this review our site receives a small referral payment which helps to support, but not influence, our editorial and other costs.

In 1957 Ezra Brooks brand was created by Frank Silverman and bottled at Hoffman Distilling Company in Lawrenceburg, Kentucky. In 1993 Luxco purchased Ezra Brooks and made it available for all “modern gentlemen”. Luxco opens Lux Row Distillers, the new facility for Ezra Brooks and other brands in Bardstown, Kentucky in 2018.

Ezra Brooks 99 Proof or Ezra 99 as Lux Row Distillers calls it, is part of a line up of six bottles bearing the Ezra Brooks branding. A brand that prides itself on having balanced, mellow whiskey and a slogan that states; “Honestly handcrafted. Honestly Ezra.” Ezra Brooks uses the finest ingredients for those whiskey drinkers with “a rugged spirit and a taste for adventure.”

When you pick up a bottle of Ezra Brooks 99 Proof, you might notice something a little different about this bottle and others from the distillery. “Lux Row Distillers” is written in raised letters at the top like and old bar bottles. Bars did this to mark the whiskey long before bottles were individually labeled and sold retail. It was a process of using a “pyroglaze” enamel to adhere the white hand lettering to the bottle in a kiln from the mid 1800s to the early 1900s.

Beyond this there’s not much more to know – the Ezra Brooks 99 bourbon clocks in at 99 proof, versus 90 proof for the original bottling. 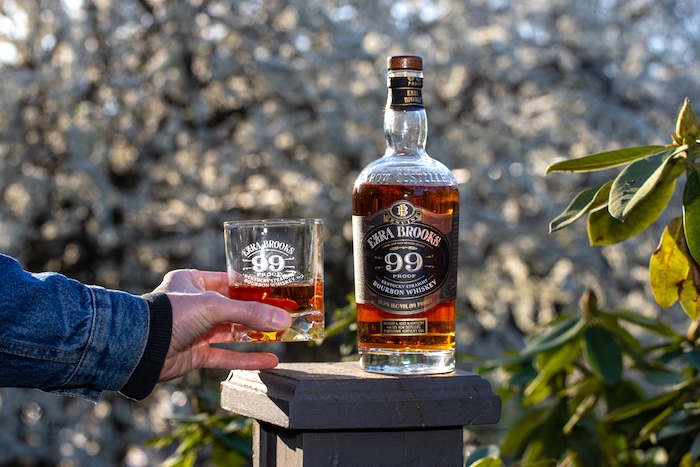 Appearance: Amber in color. A nice bottle shape with “Lux Row Distillers” in raised letters at the top. Look for the heart on the bottle.

Nose: There are notes of apricot, vanilla, honey, and peach with some slight citrus. It smells as good as spring leaves after a long winter with it’s bright floral hints.

Palate: The palate is very even all the way through. No hint of being on a flavor roller coaster even though it is hot at 99 proof it was still very smooth. The flavor profile seems simple with a great mouthfeel and very warming. Flavors include leather, oak, walnut shell, and maple.

This feels like a good three season bourbon with those seasons being: last season, this season, and next season. I felt this was a great year round bourbon that's great for sipping or mixing. The flavor profile reminds me most of spring with it's fresh leaf aroma and hints of fruit. It's warm but not too warm. A pleasant way to wake up your palate after a dark winter season. Plus, this bottle won't break the bank.