We’ve reached summer 2020, which means we’re halfway through the fresh hell that is 2020. But on a lighter—or at least boozier—note, that also means it’s time for the year’s second release of Heaven Hill’s Elijah Craig Barrel Proof.

Each batch of the Elijah Craig Barrel Proof comes from barrels of 12-year old bourbon: straight from the barrel, uncut and without chill filtering. They’ve been releasing these since March 2013. We’ve reviewed several on our site, such as this year’s first, Batch A120, as well as Batch C919, and B519. All three got high marks.

Wondering about the weird nomenclature? It’s not that tough, actually. Elijah Craig has a relatively simple taxonomy for their batches of the Barrel Proof. The first letter indicates which of the year’s four releases this is (A is the first, B is the second), and so on, the second is the month, and the third and fourth digits are the year.

And if Elijah Craig intrigues you on an ongoing basis, have you seen our Stuck at Home video about it? It’s worth a watch. What else do you have to do? 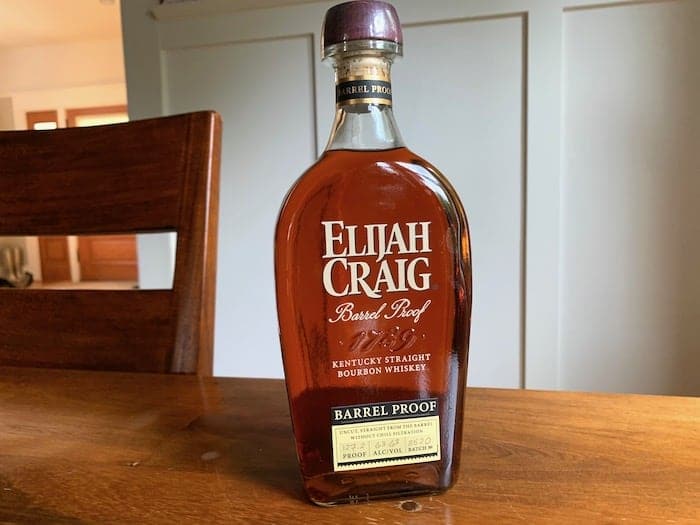 Appearance: In the bottle, deep reddish copper. In the glass, more of a tarnished brass or deeply browned butter.

Nose: This smells…like amped-up bourbon. Like Heaven Hill took the essence of what a bourbon is supposed to smell like and kept folding it in on itself. Browned butter, caramel, sugar, vanilla. Butterscotch. Toasted marshmallow. Also: grilled peaches and broiled grapefruit. It’s a Maillard reaction in a glass!

Palate: This…packs a punch. It’s got some fire! But also: sun-ripened blackberries. midway through, sun-ripened blackberries. The mouthfeel is also really pleasant! It’s creamy. Not heavy enough to cling but not too ethereal. It covers a comfortable middle ground: a very alcohol-forward middle ground. It begins sweetly and then blossoms into something warming (at this proof it had better light up your insides!). Yet it is also kind of toasty and comforting.

I dreamed a St. Bernard brought me this. This is seriously potent. I’m no stranger to high-proof but this really will knock you on your ass.

This is seriously potent. I’m no stranger to high-proof but this really will knock you on your ass. Though it's aged well, it'll fuck you up right quick! Imbibe safely.