Alongside the middle-shelf Elijah Craig Small Batch label and the high-end Elijah Craig 18- and 23-year-old Single Barrel, four times a year, Heaven Hill releases a barrel proof expression. Each one is given an alphanumeric batch identifier indicating which of the four annual releases it is, as well as the date it was released. B517 indicates this sample is the second release, from May 2017 (i.e., 5/17). We reviewed their first 2017 release, from January, earlier this year.

Elijah Craig is one of several whiskey labels in the Heaven Hill portfolio. It’s named for a late-18th century Kentucky pioneer and Baptist minister who, according to Heaven Hill, accidentally invented bourbon when he decided to store his whiskey in barrels that had been charred in a fire. That story is likely apocryphal, according to Chuck Cowdery, but Craig was a real whiskey distiller. The modern-day whiskey brand, however, has no actual connection with the real Craig.

The press release isn’t totally clear on this front, but from what I can tell, these releases are from barrels of 12-year-old bourbon that would otherwise be destined to become Elijah Craig Small Batch—which, these days, is a non-age statement blend of eight- through twelve-year-old bourbons. That means it’s made with a mash bill that’s 75% corn, 13% rye, and 12% malt. This batch came out of the barrel at 124.2 proof, so it’s definitely a beast, but not quite as hot as some of the other expressions in this series. 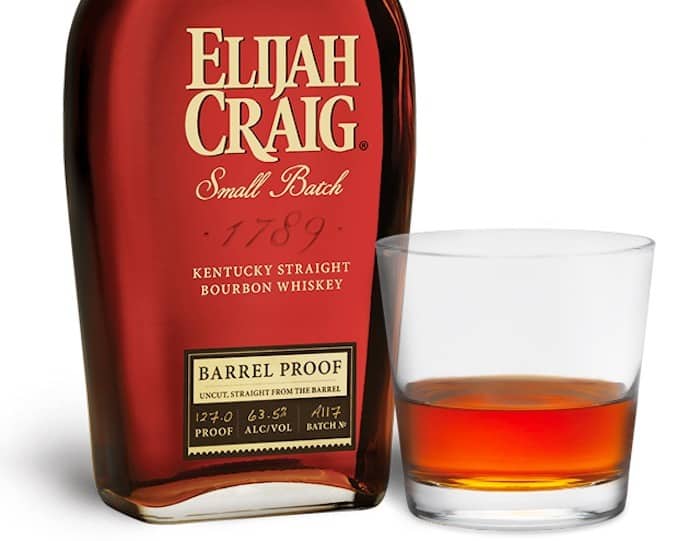 Nose: Vanilla and oak dominate, along with faint spice and candied orange peel. After adding some water, the spice notes sharpen. I still get a fair amount of vanilla, now accompanied by some caramel and burnt sugar notes, like the top of a creme brulée.

Palate: Unsurprisingly, served neat, this whiskey is too hot to get much out of. I do get some back-palate spice, and some oak. With water added, vanilla, caramel, and syrupy black cocktail cherries come to the front. Warm spice remains on the back of the palate, and tobacco and oak on the finish. The texture is tacky but not drying.

This is an unsurprising but nonetheless enjoyable bourbon. It’s well-balanced, with strong vanilla and caramel giving way to fruit, wood, and tobacco. It’s also very well-structured in the mouth, with a nice level of tannins (Tannicness? Tannicity?). Together with the other bottlings in the barrel proof series, it’s also a fun tasting experiment, if you’re into that sort of thing.