While it’s not unusual to finish whiskey in the casks of a different kind of wine or spirit, there’s something unique – but hard to nail down – about Spokane, Washington-based Dry Fly Distilling’s Straight Wheat Whiskey finished in port barrels.

The notion of taking a pretty sweet whiskey distilled from a wheat mash and giving it even sweeter attributes by aging it in the casks of a sweet wine sounds like a little too much sweetness in a dram – spoiler alert, it’s not.

To accomplish this, Dry Fly took it’s regular Straight Wheat Whiskey and just changed the aging at the end. Normally this straight wheat is made from a 100-percent white wheat from the eastern Washington area, distilled twice, and then aged for at least three years in new American oak barrels with a #3 char.

After that, what becomes the port-barrel-finished wheat is then moved to port barrels – specifically barrels from the Columbia Valley’s Townshend Cellar, who infused huckleberry into this particular port – and aged for another six months to a year.

The final product comes in at 45-percent alcohol by volume and is sold for about $50 per 750-milliliter bottle. 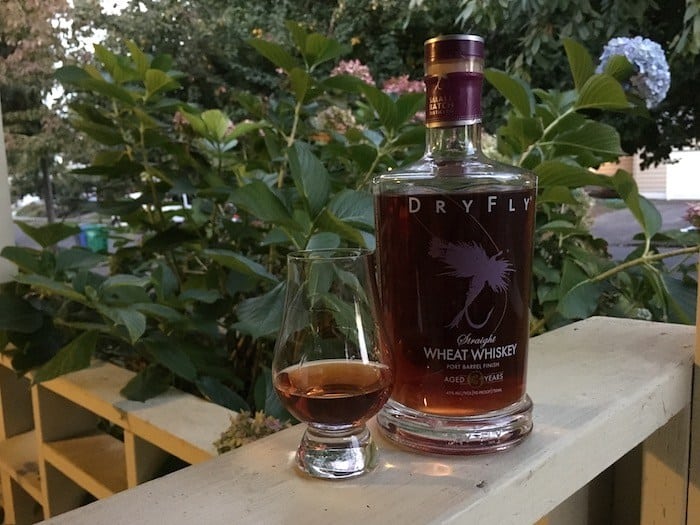 Vital Stats: Straight wheat, made with 100% white wheat from eastern Washington, twice distilled, aged three years in new American oak barrels, and then aged another 6-12 months in huckleberry-infused port barrels. Bottled at 90-proof and sold in 750-milliliter bottles for about $50.

Appearance: In a glass (and in the bottle), this wheat looks darker than most others, taking on a reddish, copper hue.

Nose: A whiff (through somewhat congested nasal passages I’ll admit) initially brings a faint scent of sweet, slightly citrusy vanilla with a touch of oak. From there, it gradually turns in a direction of a rich, sweet red wine, keeping a bit of that vanilla, but with added layers of grapes, plum and figs as well as a touch of mulling spices. That eventually takes on a richer aroma of prunes, raisins and a hint of licorice.

Palate: A sip falls onto the nearly where the nose left off with a base of wheat and vanilla. Those flavors wane, though, and quickly transition to a flavor profile that resembles a sweet syrupy wine — very much like a sweet sherry or port, with rich notes of grape and plum, but with a layer of wheat to help you remember you’re drinking whiskey. Throughout that transition and as the sip sits on the tongue, it remains very sweet on the tongue with only a hint of mulling spices.

That changes a bit when you swallow and flavors like nutmeg and cloves briefly spike in intensity, which ebbs away though as the sip again fades back into a sweet, fruity syrupy coating on the tongue with an occasional flare of spice over the next minute or so.

Having tasted two Dry Fly whiskeys now, the pattern I see is that they are able to carry through on whatever theme or vision they have for a particular type of whiskey. As obvious as it is to say, the distillery did an excellent job of imbuing their straight wheat with attributes of port, almost to the point where one might forget that he or she is drinking whiskey.

While those six to 12 months in port barrels may have smoothed out the raw qualities that many like about wheat and the sweetness may be a bit too much for some, Dry Fly’s Straight Wheat Whiskey Port Barrel Finish is an interesting experience and certainly worth a try to if you’re a fan of sweeter whiskeys and wines.