Douglas Laing & Co are an independent bottling and blending operation dating back to 1948. They specialize in selecting whiskies from across Scotland, some of which are bottled and released as single malts while others are vatted before bottling. Rock Oyster is the latter. Other Douglas Laing blended offerings include label mates Big Peat and Scallywag.

In addition to the original small batch release we are exploring today which is bottled at 46.8% ABV (93.6 proof), Rock Oyster is also available in a limited edition cask strength weighing in at 57.4% ABV (114.8 proof). 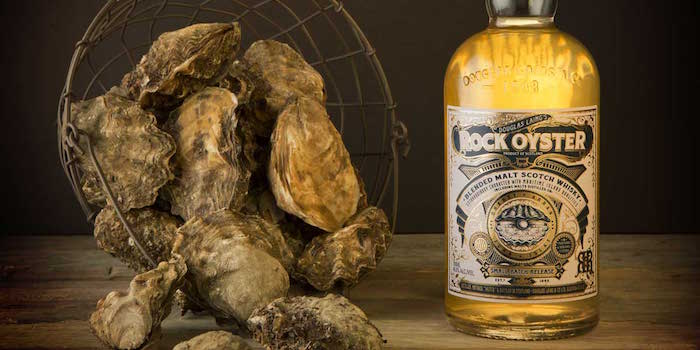 Rock Oyster has the distinction of being a blended malt, meaning the whisky in the bottle is the product of blending whiskies which begin their lives as single malts from individual distilleries without the introduction of other grain whiskies. This is a somewhat lesser known category of whisky which includes such whiskies as Johnnie Walker Green Label and Monkey Shoulder, to name only a couple.

Some of the malts included in Rock Oyster hail from the islands of Orkney, Arran, Jura, and Islay. I appreciate the fact that this is listed right on the label along with other details. The maritime theme originating with the malts selected carries forward to the label and carton containing the bottle. Overall, it is an interesting and attractive package before even cracking the seal on the bottle.

Palate: Honey, salt, metallic notes, copper, black pepper, mint. Ash which tends to move into the dust end of the spectrum as is overwhelms the smoke, somewhat reminiscent of charcoal.

The finish is layered with sweet notes, pepper, and smoke carrying through after swallowing. This decays quickly to something resembling Listernine mouthwash as the smoke dissipates. Not a particularly high note to end on.

I find myself feeling a level of affection for this malt blend which I cannot justify by the palate and finish alone. The intent to represent the island region of Scotland is executed well in the packaging and overall aesthetic. I found myself rooting for the whisky to be more enjoyable than I found it to be during multiple tastings.

Sadly, this is a case where the whole is not greater than the sum of its parts as the dram failed to truly come together in a satisfying way for me. That being said, I would be genuinely interested in giving the cask strength version a go.